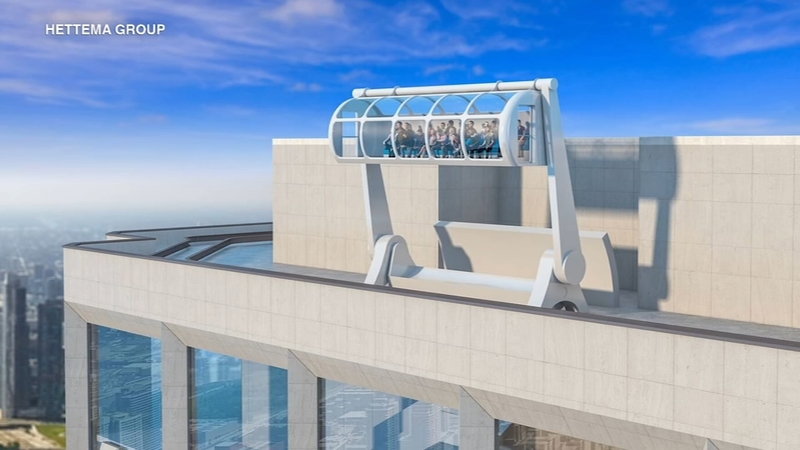 CHICAGO (WLS) -- With sweeping views of Millennium Park, the owners of Chicago's third-tallest skyscraper have plans to build the city's third observation deck on its top floors.

The Aon Center has been a fixture of the Chicago skyline since 1974 when it was completed as the Standard Oil Building. Despite its height and incredible views, the Aon Center has never had a public deck on its top floors. Owners said with so many tourist attractions nearby, now is the time.

"We know as we sit across from Millennium Park, there are 15 million visitors every year. We believe we will see many of them wanting to experience this attraction," said Matthew Amato, Aon Center's general manager.

The attraction will be more than the great views. The plan is to build a glass exterior elevator on the buildings northwest side to take tourists up and down 82 floors.

The observatory would start at 1,117 feet, on the 82nd floor. The Aon Center stands at 1,136 ft. The elevator would be housed in the country's tallest and fastest glass-enclosed external elevator shaft, according to a release from developers.

To compete with the Willis Tower's Ledge and The Hancock's Tilt, tourists can experience the Sky Summit at an extra cost.

"It's a two-wheeler ride, if you will, that's going to take 22 people and bring them over the side of the building in this glass tube with an opaque floor that will turn color," said Amato.

To create the observatory, some of the iconic building's steel columns and granite cladding will be removed, which may not sit too well with preservationists and the architecture community. It is a delicate dance 42nd Ward Alderman Brendan Reilly knows he will have to navigate for City Council approval.

"The purists would like to see the skin of the building left alone without applying an external elevator, others don't have an issue, so we will have to work through the input and make choices, " said Reilly.

"I'd love to see that! If you build a third one, I'd come back here," said Afrin Patel, who was visiting from Canada.

Tourist experts expect all three observation decks to survive because the buildings offer different views from their different locations.

The Aon Center Observatory will also include a lounge, restaurant and special event space. Developers said it's expected to draw 2 million visitors each year, generate $900 million over 20 years and a return of more than $218 million in tax revenue.

Alderman Reilly says Aon Center's plan will involve more public meetings. The proposal must be approved by Chicago's Plan Commission and the full City Council. If all goes as planned, Aon owners hope to complete the project by 2020.