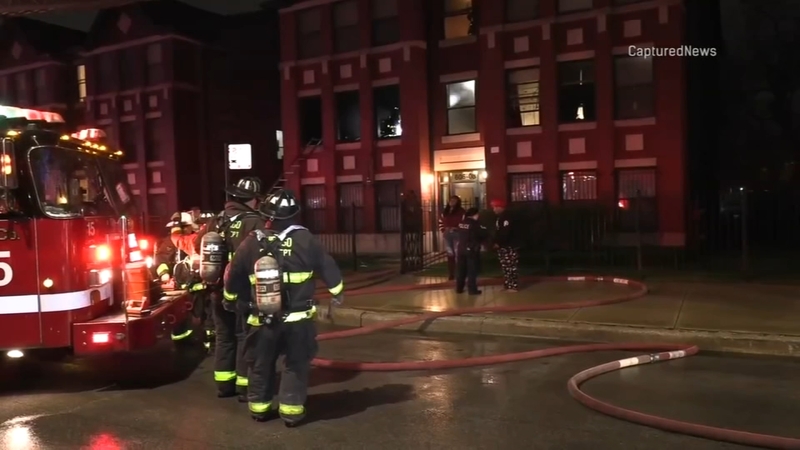 Girl, 3, who died in South Side apartment fire ID'd, ME says

CHICAGO (WLS) -- A 3-year-old girl died who in an apartment fire Saturday morning in Bronzeville on the South Side has been identified, the Cook County Medical Examiner's office said.

The girl, identified as Story I. Chamba, died of burns and smoke inhalation after she was pulled from the flames, according to officials.

The cause of the fire has been ruled to be incendiary, possibly caused by cooking on the stove.

"Just to see her laying there like that, it's horrible," said a neighbor, who didn't want to be identified.

She said she witnessed the unthinkable when firefighters pulled the lifeless body of her neighbor's 3-year-old daughter from their burning apartment after the girl's brother began screaming for help.

"He said, 'Call help.' He said, 'Please help me. My little sister and my dog is in the house,'" the neighbor recalled.

The 3-year-old and her 13-year-old brother were home alone when the fire broke out early Saturday morning in the 600-block of East 43rd Street.

Officials said the children's mother had been at work and was returning home as the fire department arrived, and found flames shooting out of the second-floor apartment.

Third-floor resident Christopher Mcgay woke up to the blaring sound of fire alarms and the smell of thick black smoke.

"The people downstairs were yelling like, 'Where's the baby and fire?' So I started putting on my stuff and getting everyone out of the building," Mcgay said.

Firefighters beat back the flames and were able to force their way into the building in an effort to rescue anyone still inside.

"Companies did a primary search and on a second floor, they removed an approximately 3-year-old child in a middle bedroom," said Deputy District Chief John Giordano with the Chicago Fire Department.

The little girl was rushed to a nearby hospital in critical condition but later died from her injuries. Her brother was not hurt.

Because someone died in the fire, firefighters returned to the neighborhood later in the afternoon to pass out smoke detectors and fire safety information.

Several residents were also displaced by the fire.