2 dead, including gunman, 2 others injured in shooting near California voting site 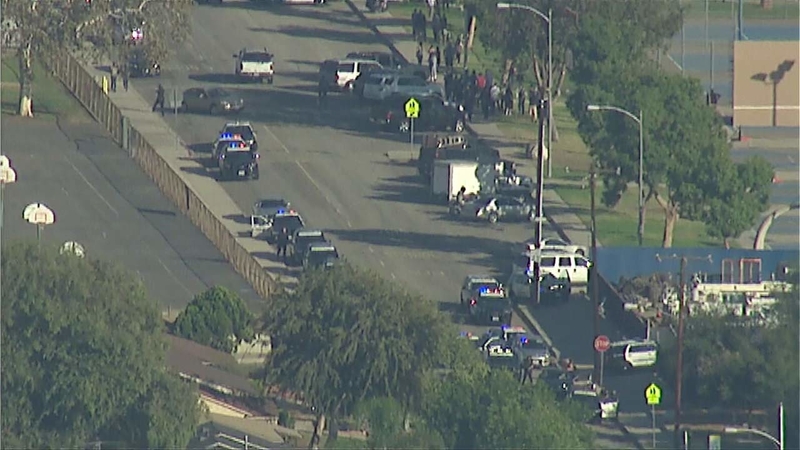 AZUSA, Calif. -- Two men were dead, including a gunman, and two women were hospitalized Tuesday afternoon after police responded to an initial shooting in Azusa, Calif., and exchanged gunfire with the suspect, authorities said.

Shortly after 2 p.m., police were called to a report of shots fired in the 500 block of Fourth Street, where they arrived to find multiple victims "down," said Capt. Steven Hunt, acting chief of the Azusa Police Department.

As they attended to the injured, the officers were "met with gunfire" by a shooter armed with an assault rifle, Hunt said. A shootout ensued, involving five Azusa officers and one Irwindale officer.

A massive law-enforcement response response followed, including SWAT teams and sheriff's helicopters, and the victims and the pinned-down officers were extracted to safety.

The gunman died at the scene and three wounded patients were transported to hospitals, the Los Angeles County Fire Department said. One of the victims died at a hospital, Eyewitness News has learned.

The two female survivors were listed in critical condition. No officers were among the injured, Hunt confirmed.

The shooter was found dead inside a home, according to the Los Angeles County Sheriff's Department.

The location was near Memorial Park, Mountain View Elementary School and Slauson Middle School, all of which were placed on lockdown. No one at the schools was hurt, according to the Azusa Unified School District.

The campuses and the park were being evacuated by police, Hunt said.