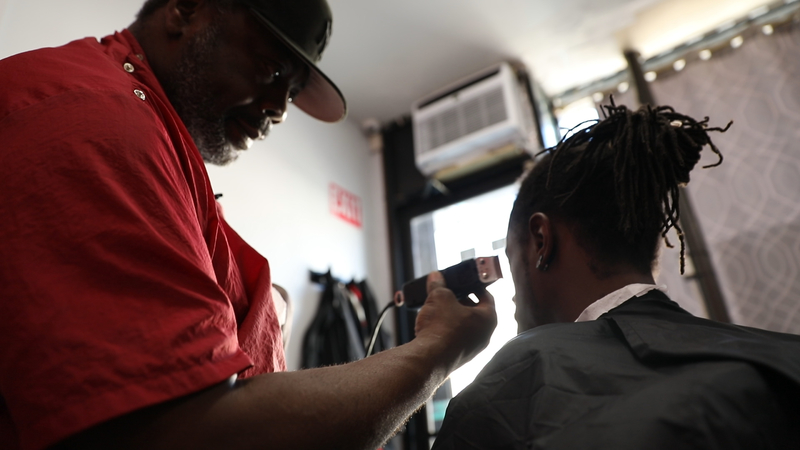 Meet the one-armed barber of Queens

QUEENS, New York -- "What's the sound of one hand clapping?"

Perhaps there's no answer to this ancient, Buddhist riddle. But the sound of one hand giving a haircut?

Eyewitness News learned it sounds just like the two-handed kind, plus a whole lot of laughter from the boisterous barber holding the clippers.

Harold Brown is the self-proclaimed "Best One-Armed Barber in the World." The title is a bit of a misnomer: he has two arms, but the left is limp with little practical function. He performs every fade, layer and dye job with, for all intents and purposes, one arm tied behind his back.

Brown's journey, beginning in Queens, spending decades in the prison system, starting over from scratch, becoming an inspiration to hundreds of young people, and winding up back where he started, can all be traced back to that left arm. And it started the day he was born.

"My deformity is a birth defect," Brown said. "My mother was petite and I weighed 10 pounds, 11 ounces."

Since Cesarean sections were neither common in the 1960s nor as accessible to his family, Brown says his arm was twisted during a difficult childbirth.

"I didn't get the medical attention I needed when I was a child to get the arm back into its regular state," he said.

When he started school, Brown realized his hardship would follow him for life.

Brown's soft spot made him harden his shell. He'd fight anyone who challenged him and began a life of crime.

"I used to sell loose joints on the Staten Island Ferry boat," he said. "And in selling the drugs, it made me start buying nice clothes, start making me look better. It made me feel good, and now, people accepted me like that. So I wanted to sell more drugs. But it made me go to jail when I got arrested for it."

"The last time I went to jail, I didn't have no more support system," he said. "I was in this real state of depression. And it was a correction officer that I grew up with and he was like, 'That ain't you, man.'"

In his hour of darkness, one bright shaft of light shined through Brown's cell window.

"There was a barber I used to hang out with at the prison barbershop named Desperado," he said. "He was the nicest one there. I used to hang out with him every day. So the officer, he says to me, 'Yo, Brown, why don't you cut hair, man?' I was like me, a barber? I didn't even see it. So I gave it some thought and came back a few days later and said I think I want to be a barber, man."

Brown was released in November of 2011, a 48-year-old man starting his life over from scratch.

"I didn't have nowhere to live, but I knew I had a craft," he said.

With little more than the clippers he'd brought from jail, Brown moved into a shelter. He learned quickly that the others living there had something in common. They all needed haircuts.

"My first night there I made about a hundred dollars," he said.

Brown worked his craft at the shelter before enrolling at American Barber Institute to get his license. He got a job at Levels, a popular barbershop in Harlem, and for the first time in his life, was thriving in legitimate trade. Then, one phone call changed his life yet again.

"One of my old instructors called me and said, 'Yo Brown, would you like to become an instructor at American Barber Institute?'" he said "And they hired me. I came there with me. I couldn't be nobody else but me."

In three years, Brown trained hundreds of students. When he thinks of the relationships he forged, he becomes noticeably emotional.

As he considers the parallel to his relationship with his mentor, the tears begin to fall.

Now, finally back where he started, Harold Brown is loving life and sharing his craft. His former student, Willis Cudjoe, invited Brown to barber at his shop, Will Du, in Jamaica.

Cudjoe has spent years working with the autism community and has combined his two passions. Once a week, people with autism are bused in from a group home so Brown and Cudjoe can give them haircuts. Anyone who can't afford it gets their fade for free.

"I've been picked on, I've been laughed at, I've been not accepted," Brown said. "So I don't want to put anybody through that. They'll get that sharp line, and they'll look good."

Brown's still teaching, too. One night a week, he teaches local youths the art of barbering so they can find honest livings in the neighborhood.

So what's the hardest part of cutting hair with only one arm?

"The hardest thing is, honestly, the first time the person is in the chair," Brown says, letting out a hearty laugh. "Their perception is the hardest part."

And it's all a labor of love.