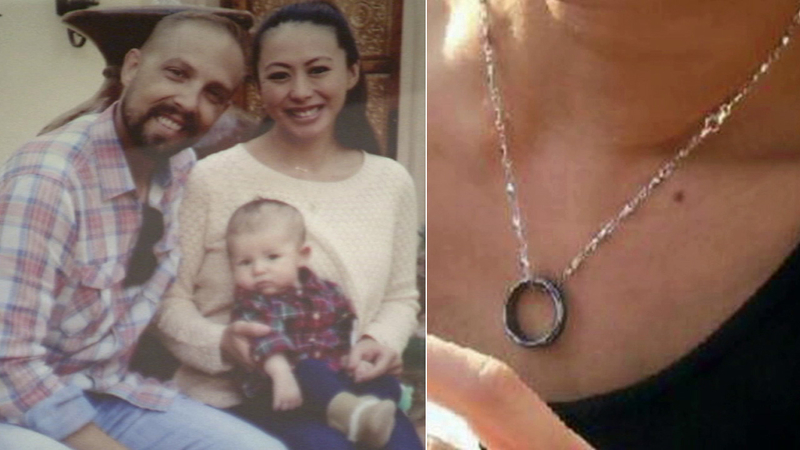 LAGUNA HILLS, Calif. -- An Orange County mother is holding out hope someone will find her lost necklace, which holds her late husband's wedding band.

Bernadette Terzich says its monetary value is small, but its sentimental value is priceless. It belonged to her late husband Alex, who passed away last January at the age of 35 after a long battle with leukemia.

"We were married for two and a half years when he passed away," Terzich tearfully recalled. "He was an incredible man. He was the most friendly, loving, godly man that I've ever met in my life and a good father."

Terzich says she hoped to hand down the Tungsten silver wedding band to their 9-month-old son, Logan.

She says she wore the silver chain containing the wedding band every single day after Alex passed away. The one day she took it off, May 17, she lost it.

She was in Laguna Beach around 6 p.m. near the Montage Laguna Beach hotel to have her first Mother's Day photos taken with Logan. She says she removed the necklace while she decided whether she should wear it during the photo shoot.

She believes she dropped it somewhere between the underground parking structure and the beach, near Pacific Coast Highway and Wesley Drive in Laguna Beach.

"It's a devastating loss to me and it was the week of our wedding anniversary that I lost it as well, so it was hard," Terzich said.

She retraced her steps. People with metal detectors have also scanned the sand with no luck. Terzich then turned to Facebook where she posted a photo of the ring and necklace. Friends started sharing her story with friends and with Eyewitness News through #abc7eyewitness.

"I'm just hoping and praying that a Good Samaritan will find it and turn it in," said family friend Erica Schrader.

Terzich says she tries to stay strong by telling herself that the ring is just a temporary token, and that the bigger part of their love is their young son.