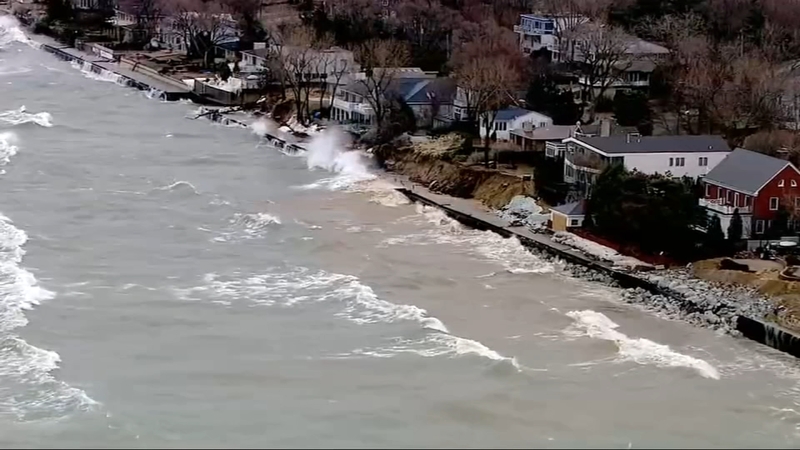 BEVERLY SHORES, Ind. (WLS) -- The beautiful and powerful Lake Michigan is the big draw for those who live in Beverly Shores - but it is the lake that nearly forced them to move a year ago.

Beverly Shores has a population just over 600 full-time residents. A number of their homes were in serious danger of being swept into the lake as the waves were eroding the beach at an alarming rate, threatening the road and the homes on the other side of it.

RELATED | Our America: Climate of Hope

"It was genuinely a crazy time," resident Mike Houlihan recalled.

Houlihan watched last year as the lake crept closer and closer to his home by the day. Much of what was once beach was now lake after an unusually warm winter failed to create the ice dams that normally protect the shoreline.

Town council president Geof Benson appealed to the state and federal government for help, but ended up having to borrow $5 million on a 20-year bond so the town could save itself.

"From the past what they did, it held for a long time, it just didn't hold forever," Benson said.

It worked. While beach access is still restricted, the road and homes are safe for the time being. The money allowed the town to buy boulders to pile up to protect the land on the other side from the encroaching waves. They also put down netting and plants to help keep the sand and soil in place.

Retired resident Ed Bracken did much of the work himself.

I just came out here and starting doing what I could to save, so the erosion wouldn't get any worse," Bracken said.

Also working in the town's favor, the lake level which typically rises and falls in a cycle. This year it appears to be in a downward cycle.
Report a correction or typo
Related topics:
weatherporter countybeachesbeach erosiongreat lakeslake michiganclimate change
Copyright © 2021 WLS-TV. All Rights Reserved.
More Videos
From CNN Newsource affiliates
TOP STORIES