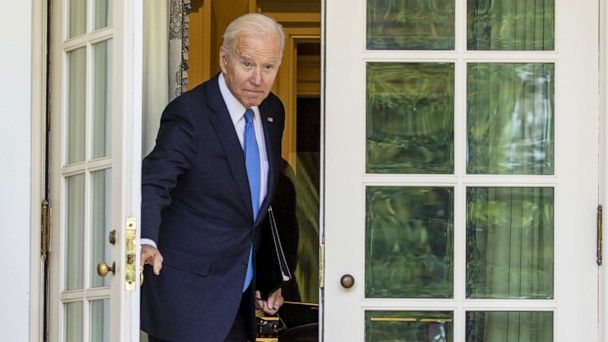 President Joe Biden gathered a group of "Dreamers" at the White House on Friday for a discussion about the importance of the DACA program, which provides deportation relief to young people brought into the country as children.

The group of six "Dreamers," a reference to the DREAM Act proposals in Congress that would offer DACA recipients a pathway to citizenship, met with Biden for about 45 minutes. Each engaged on a personal level with the president, according to those in attendance.


The latest iteration of an attempt to get "Dreamers" legal status was introduced by Rep. Lucille Roybal-Allard, D-Calif., as the American Dream and Promise Act of 2021. The bill would give an estimated 2.3 million "Dreamers" the ability to stay in the U.S. legally.

The meeting underscored Biden's efforts to prioritize more permanent forms of relief for "Dreamers," including a pathway to citizenship for those already in the country. It comes as the fate of the DACA program rests, in part, with a federal judge overseeing a lawsuit that argues DACA is unconstitutional.

Biden offered each "Dreamer" the opportunity to ask him one question during the meeting. Astou Thiane, who was 7-years-old when she immigrated to the U.S. from Senegal, asked Biden to describe the country, a place where he spent a lot of time as vice president.

"All I wanted to know was what was Senegal like," she said. "It was very overwhelming to hear about this place that I hope to be able to return to and visit while also not losing my home here."

Astou became overwhelmed with emotion and described the moment the president embraced her.


"When I was breaking down, he came and he had this moment where he put his forehead on my head and hugged me,"Astou said. "And so I think that I believe him, I think that he is going to do his work and to do his all to make sure that the folks who need to hear our stories can hear it so that they're not just thinking this is a political issue."

Astou said she had the opportunity to share with Biden her ownexperience navigating college admissions as an undocumented Black immigrant, as well as her work with Caribbean and African immigrant families in Canarsie, Brooklyn.

A White House readout of the meeting highlighted the president's political goals and his support for a new pathway to citizenship.

"President Biden reiterated his support for Dreamers, TPS holders, farmworkers, and other essential immigrant workers," the White House said in a statement. "The President and the Dreamers also discussed the continued need for immigration reform and the White House's strong support for the Dream and Promise Act and the Farm Workforce Modernization Act, two bills that have already passed the House with bipartisan support and are awaiting action in the Senate."

The Farm Workforce Modernization Act would create a system for more than 1 million undocumented farm workers to apply for legal status.


Supporters of the DACA program worry that an upcoming ruling from U.S. District Court Judge Andrew Hanen of Texascould disrupt the Biden administration's efforts to reinstate it after former President Donald Trump's administration attempted to dismantle it. Instead, they'd like to see the program bolstered by the DREAM Act.

But Hanen, an appointee of President George W. Bush, stopped an Obama administration effort in 2015 to create a deferred action program for parents of "Dreamers," known as DAPA, and stakeholders have been waiting months for a ruling in the case brought by Texas, among other states, which charged that DACA undermined the ability of Congress to establish immigration law.

Republicans have long argued that President Obama's decision to create DACA was an exercise in unconstitutional executive overreach.Supporters of DACA maintain that it's a necessary and reasonable means of law enforcement discretion given the lack of options presented by current immigration law.