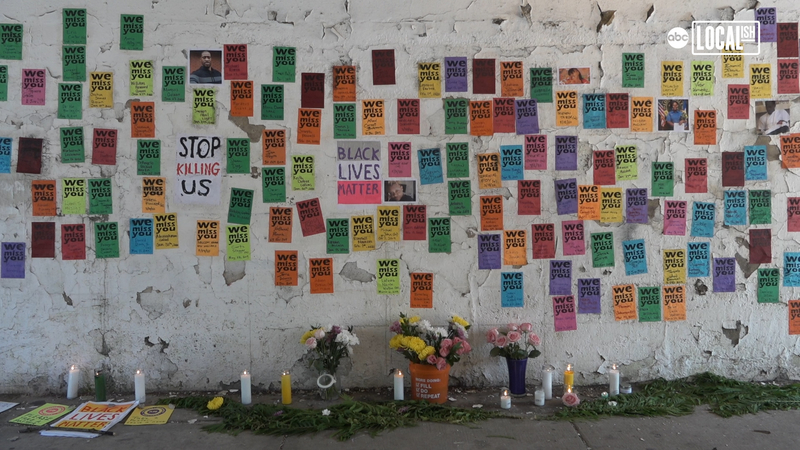 CHICAGO -- Under a portion of the Red Line sits a neighborhood memorial dedicated to the Black lives lost to police violence.

"A Black person is killed by the police every 24 hours," artist and activist Matthias Regan said. "The enormity of that is beyond most of our comprehensions. I don't think this can represent that but it can represent a piece of that."

Along with The P.O. Box Collective, Regan helped design the mural-memorial. The activist artwork was intended to show the Rogers Park community how prevalent police violence is around the country, displaying the names of black people who have died in police custody.

There are names on the wall you'll likely recognize, like Sandra Bland, Breonna Taylor, Laquan McDonald and George Floyd. But there are also names you might not know, like Mya Hall, Steven Taylor and Shelby Gazaway.

"From databases, we compiled a set of names with the idea being that people from the neighborhood can come by, write the name and put it on the wall themselves so that the public can participate," Regan said.

"It's more than a mural, it's a community altar," added Mariela Aranda. "We also have candles and folks are welcome to write the names of people they've lost to police gun violence. We really want this to be a space where folks feel inclined to memorialize the stories of our neighbors."

Usually, you'll see public memorials like this when someone famous dies. It's a physical representation of group mourning.

"That was part of the project for me, to give a space for the neighborhood to let out their accumulated feelings about black death," Regan said.

"I think this really brought a sense of pride in our community," Aranda added. "That's so necessary because right now people are really suffering because of systems and the only thing we have is each other."