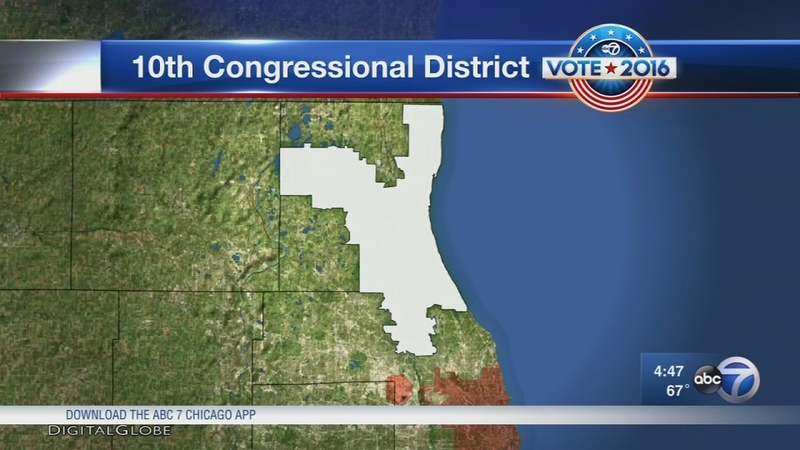 NORTHBROOK, Ill. (WLS) -- One of the most competitive congressional races this year is in Illinois' 10th District. The incumbent congressman Bob Dold faces Brad Schneider. It's the third time these two candidates have faced each other in this north suburban district.

Since his first election in 2010, public office has not come easy for Dold, the 10th District's self-described moderate Republican.

Dold's opponent, for the third cycle in a row, is former congressman Brad Schneider. He beat Dold in 2012, lost in 2014, and this year hopes to return the see-saw seat to the Democrats.

"We know in a presidential year more people turn out; more of those people tend to be Democrats," Schneider said.

The north suburban 10th is one of the few swing districts on the nation's mostly polarized political map.

Dold touts what he calls an "independent record" claiming to have opposed his party on many issues including gun control and abortion.

"The only way we're going to move forward is with folks like myself who are going to bridge the gap and bring people together," Dold said.

Schneider contends Dold has sided with the Republican majority on the federal budget and procedural issues that ultimately have blocked votes on many reforms.

"He supports the Republican budget that ends the Medicare guarantee as we know it, that cuts Pell Grants making it harder for families to send their kids to school," Schneider said.

"My opponent has been called out for lying by everyone from the Human Rights Campaign to the Washington Post as trying to mislead voters," Dold said.

Dold was one of the first Republicans to oppose Donald Trump's presidential campaign.

But Schneider and national Democrats are spending thousands of ad dollars trying to link the congressman to Trump.

"He said he's not going to vote for Donald Trump but he's been actively campaigning against Hillary Clinton. You can't have it both ways," Schneider said.

"My opponents running a dishonest, disingenuous campaign. We're trying to run a positive campaign to give people a reason to come and vote for us," Dold.