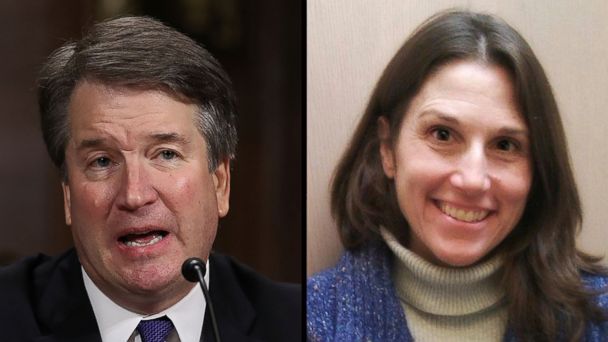 With only a week to conduct its high-stakes investigation into the sexual misconduct allegations against Brett Kavanaugh, the FBI has already contacted the second woman to accuse the Supreme Court nominee, her lawyer said.

Deborah Ramirez, a former Yale classmate of Kavanaugh's, told The New Yorker earlier this month that they had been at a house party together during the mid-1980s when he "thrust his penis into her face," causing her to "touch it without her consent as she pushed him away."

Ramirez's lawyer said on Saturday that the FBI had contacted her to hear her story.

"We can confirm the FBI has reached out to interview Ms. Ramirez, and she has agreed to cooperate with their investigation," Ramirez's attorney, John Clune, said in a statement. "Out of respect for the integrity of the process, we will have no further comment at this time."

President Donald Trump tweeted late Saturday -- after returning to Washington, D.C., from a rally in West Virginia -- that he would not limit the investigation in any way. NBC News had reported earlier in the day that the president had limited the scope of the investigation, including restricting access to Julie Swetnick, a woman represented by lawyer Michael Avenatti, who claims she witnessed sexual misconduct by Kavanaugh while he was in high school. Kavanaugh has flatly denied her claims.

News of the agency reaching out to Ramirez comes after emotional and heated days of testimony, high-stakes negotiations and an investigation with a strict deadline.

The investigation came after a raucous hearing with bitter exchanges and a stark divide along partisan lines.

The process has left the country and its leaders in the Senate deeply embittered, but Democratic Senator Chris Coons of Delaware believes the investigation will set us on a path to mend the divisions.

"It could help heal the Senate, which is bitterly divided over Judge Kavanaugh's nomination," Coons told ABC News' Dan Harris in an interview Saturday on "Good Morning America."

Coons, a Senate Judiciary Committee member, said the findings of the investigation will likely lead to one of two outcomes.

"It could help Judge Kavanaugh move forward with less of a cloud over him, or it could make it clearer that he is unfit to serve," the senator said.

Coons was among the Democratic members of the Republican-led committee who on Friday met to the side with Sen. Jeff Flake, R-Arizona, a crucial swing vote. Flake, in an apparent about-face, subsequently announced he would not vote to confirm Kavanaugh unless there was an FBI investigation into the sexual misconduct allegations against him.

Coons told "GMA" he believes Flake's earlier encounter with two women upset about his initial support for Kavanaugh also played a part in the senator's decision.

The women, Ana Maria Archila and Maria Gallagher, confronted Flake as he entered an elevator on his way to the committee meeting Friday morning, telling him they were sexual assault survivors.

"They are important in principle among those many [sexual assault] survivors who have come forward and shared their stories with us," Coons said of the two women. "My friend Jeff Flake listened to his heart and listened to their concerns and to his doubts and came to an agreement for a one-week, limited-in-time-and-scope investigation into the credible allegations against Judge Kavanaugh. I think that was significant."

Christine Blasey Ford, a psychology professor at Palo Alto University and a research psychologist at Stanford University, alleges that Kavanaugh sexually assaulted her at a small party in suburban Maryland when they were teens in the early 1980s. She testified under oath before the Senate Judiciary Committee in Washington, D.C., on Thursday.

Kavanaugh, a Republican federal judge, has repeatedly denied the allegations and reasserted his innocence in his own testimony Thursday. Visibly angry and fighting back tears, Kavanaugh said the claims have "destroyed" his family and his "good name," and he blamed Democrats for turning his confirmation process into a "circus."

President Donald Trump later on Friday granted the Senate's request, ordering the FBI to conduct a "supplemental investigation" into his nominee for the nation's highest court.

As part of the investigation, the FBI will be interviewing the second woman to accuse Kavanaugh of sexual misconduct, Deborah Ramirez, who told her story to The New Yorker earlier this month.

"We can confirm the FBI has reached out to interview Ms. Ramirez, and she has agreed to cooperate with their investigation," Ramirez's attorney, John Clune, said in a statement. "Out of respect for the integrity of the process, we will have no further comment at this time."

The Judiciary Committee on Saturday sent a letter to the FBI and DOJ seeking a criminal investigation of a person who made criminal allegations against Kavanaugh but later recanted after Committee investigators queried Kavanaugh about the accusations and a transcript of the questioning was made public.

"The Committee is grateful to citizens who come forward with relevant information in good faith, even if they are not one hundred percent sure about what they know," Committee Chair Charles Grassley wrote in the letter to FBI Director Christopher Wray and Attorney General Jeff Sessions.

Coons told "GMA" that the FBI probe of the allegations against Kavanagh will be important for bringing facts before the Senate about the allegations, and that it "would make a critical difference in the final votes of several undecided senators, both Republican and Democrat."

But he said that no matter what the investigation finds, he will oppose Kavanaugh's nomination based on his judicial record.

"I decided I would vote against Judge Kavanaugh based on his legal theories and his jurisprudence before Dr. Ford's disturbing allegations ever came forward," Coons said.