Victims of alleged racist incident at Naperville Buffalo Wild Wings speak out: 'We could tell that he did not want us there' 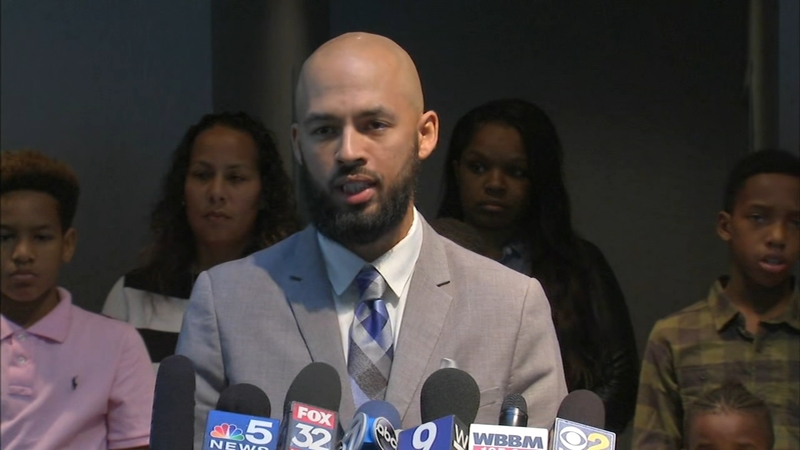 AURORA, Ill. (WLS) -- The group of African-American customers who said they were asked to change tables at a Naperville Buffalo Wild Wings restaurant because of their skin color spoke out about the incident at a press conference Tuesday.

The incident happened at the Buffalo Wild Wings on 75th street in Naperville. According to the victims, in late October a group of about 18 customers, children and adults of multiple ethnicities, were asked to move to another table because another customer didn't want to sit near black people.

Justin Vahl said the group had been at some basketball games that day and one of the kids was celebrating a birthday. Vahl had asked the host about accommodating some additional people in their party when he said the host asked him what his race was.

"I was appalled," Vahl said. "I was immediately astonished I was even asked this question, but I responded, 'What does that matter?' and so the host said, 'We have a regular customer here who doesn't want to sit around black people.'"

A group of customers at a Buffalo Wild Wings who say they were asked to move tables because of their skin color spoke out at a press conference Tuesday morning.

As they took their seats near the alleged racist customer and Vahl alerted the rest of the group what was going on.

"That racist customer continued to look back at us and give us some dirty looks. We did not speak with him but we could tell that he did not want us there, us being a black, biracial, just a very unique and diverse and happy group, and obviously this bigot of a customer did not want us sitting there in a public establishment," Vahl said.

According to the victims, two managers of the restaurant asked to move the group to another table away from the couple. Mary Vahl documented the incident on Facebook.

After about 45 minutes of awkwardness and going back and forth with management, the group decided to walk out. They then reached out to upper management.

"It brought tears to my eyes, to the point where when I walked out of the restaurant that night I called my mother and I couldn't even speak," Marcus Riley said. "She answered the phone, it was dead silence, right, it's me with tears."

To right the wrong, Lambert said the families are seeking a zero-tolerance definition in employee handbooks, a hotline where anyone can report racial bias, signage in break rooms to combat bigotry, and an accountability system.

"We take this incident very seriously and after conducting a thorough, internal investigation have terminated the employees involved. Further, we have banned the customer who exhibited the inappropriate behavior from all Buffalo Wild Wings sports bars for life. Buffalo Wild Wings values an inclusive environment and has zero tolerance for discrimination of any kind.

"We have been in direct communication with the group of guests to understand their account of what happened and have offered our deepest apologies for any unacceptable behavior. In addition to a company-wide RESPECT program we launched this fall, Buffalo Wild Wings will conduct sensitivity training throughout our Chicagoland sports bars in response to this incident."

The group says they are not pursuing a lawsuit right now, but would like to sit down with the owners of Buffalo Wild Wings and discuss what changes they plan to make going forward.

"This is a perfect opportunity for Buffalo Wild Wings to be a good corporate citizen," said attorney Cannon Lambert, who is representing the group. "You don't have to file a lawsuit if there is not disagreement."

At a Tuesday night city council meeting, there was a frank talk about race; words aimed at healing in the face of bigotry.

"Join me in supporting that the city of Naperville add language around diversity and inclusion in its mission statement," said City Councilman Benjamin White.