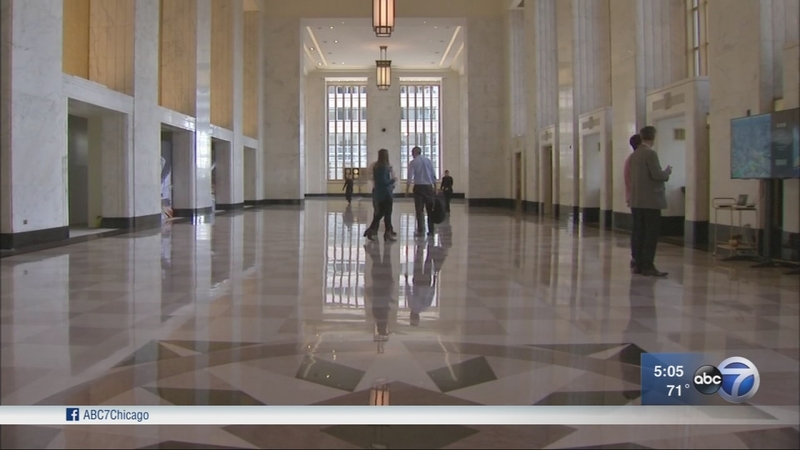 CHICAGO (WLS) -- Lobby renovations of Chicago's shuttered Main Post Office, which are part of a massive $600 million project to transform the behemoth building, are complete, Mayor Rahm Emanuel announced Wednesday during a tour of the historic structure.

"We are the third developer into the project," said Brian Whiting, of Telos Group. "We are the first ones to spend dime one to start to improve the project."

So far they have removed 20 million pounds of debris from the building.

The project includes retail and office space. On top, a four-acre deck with cafes, sports courts and a quarter-mile running trail is planned.

The post office, located at 433 W. Van Buren St., is listed on the National Register of Historic Places and has been vacant since the city's main post office operations relocated more than 20 years ago.

If the lobby is any sign of what the developer plans to deliver, the building's past will not be forgotten.

"It is incredibly important to maintain the history of this icon in Chicago. We are playing that back in the future of this building," said Sheryl Schluze, of architecture firm Gensler.

The 2.8-million-square-foot building spans three city blocks and five acres. It's currently the largest development project in the nation.
"This is truly a gateway. The expressway runs under it. The trains run through it. You basically can't come into the city without passing by it," Whiting said.

As Emanuel toured the space on Wednesday, he noted that the building could attract big companies such as Amazon, which is currently looking for a location for its second North American headquarters.

"The key thing, (Amazon) wanted was to be ready on Day 1 and we are going to be ready as a city on Day 1," Emanuel said.

Whiting also said they are thinking about Amazon.

"We are just hoping to be part of the city's effort to bring Amazon here. We will work with any and everybody to create the campus for them," Whiting said.