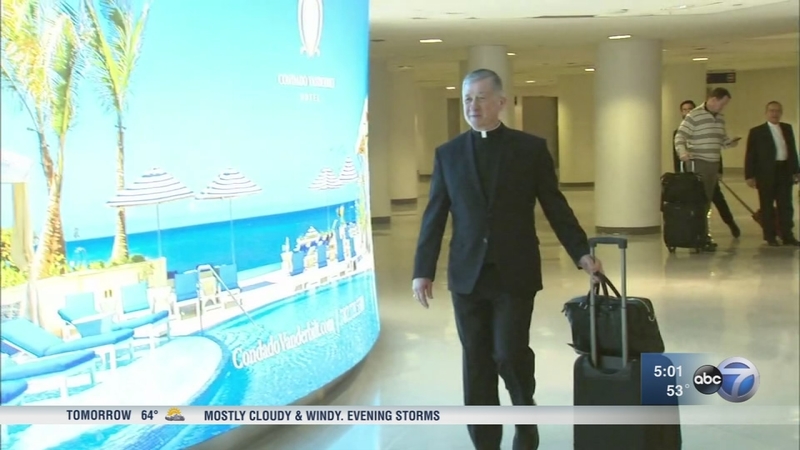 Cupich, the leader of the Chicago Archdiocese, is making the visit at the request of Pope Francis. Nearly three months after Hurricane Maria, the island is still struggling.

"These are fellow Americans, let's not forget that, these are countrymen and we need as a nation to rally around the people who are suffering," Cupich said.

In San Juan, while life has returned to normal for some there's debris from destroyed buildings that show no sign of rebuilding.

Residents continue to grapple with a lack of electricity and clean drinking water.

From above Dorado, just west of San Juan, a drone captures an endless checkerboard pattern of blue FEMA tarps covering rooftops that were damaged by the hurricane. Hundreds of the blue tarps are also visible from airplanes flying into San Juan.

Many of them are from Chicago and the suburbs, including Airman Oscar Leonardo Vidales, of Cicero.

"It's really devastating to see what Hurricane Maria did to their island," Vidales said.

Also at the Muniz Air Base in Carolina, Puerto Rico, is Airman Starlyn Stratton, of Chicago.

"I feel like I'm actually doing something for people. It's a job that needs to be done as soon as possible," Stratton said.

These Illinois service members are providing key support both on the military base and in various island communities.

Technical Sgt. Luis Pozo, one of many living in humble, temporary military field tents to help Puerto Ricans, has developed an appreciation for the service they're providing.

"When you have older individuals, grandfathers, grandmothers, coming out in tears just wanting to hug you, you get a sense of pride. No words to describe that," Pozo said.

Chicago-raised Carlos Salgado, who has returned to his home in Dorado - about 15 miles outside San Juan - is one of many Puerto Ricans showing their resilience.

Salgado said he takes one day at a time.

"Talking about this just brings tears to my eyes," he said.

His only power source is a generator, and spends hundreds of dollars to fuel it and purchase clean drinking water.

The neighborhood is littered with damaged and destroyed homes. Some houses are completely gone, just a staircase to nowhere in one case.

The town of Dorado is not unique. In countless towns and smaller cities all across the island, Hurricane Maria punctuated life on Sept. 20 - creating a dividing line between life before and after.

The hurricane, which shared his mother's name, hit on Salgado's birthday. The hurricane's significance is still sinking in for him.

"I think about it every day ... I don't know it just runs through my mind," Salgado said.

He also thinks about whether he should leave. However, on Sunday, he said he's staying.

"It's not easy but we've got to survive, you know," he said. "Us Latinos, we're a very proud clan. Like everybody's saying, Puerto Rico strong."

Cardinal Blase Cupich is embarking on a mission to Puerto Rico Sunday morning.

There are some positive signs in the harbor -- cruise ships in port, signaling the return of tourists and their dollars to help fuel the economy.

"We talked today, the cruise ship and hotels, we're staying at the Hilton, they guaranteed us everything would be OK, so we're taking their word for it," said Mitchell Bernstein, of Wheeling, Ill.