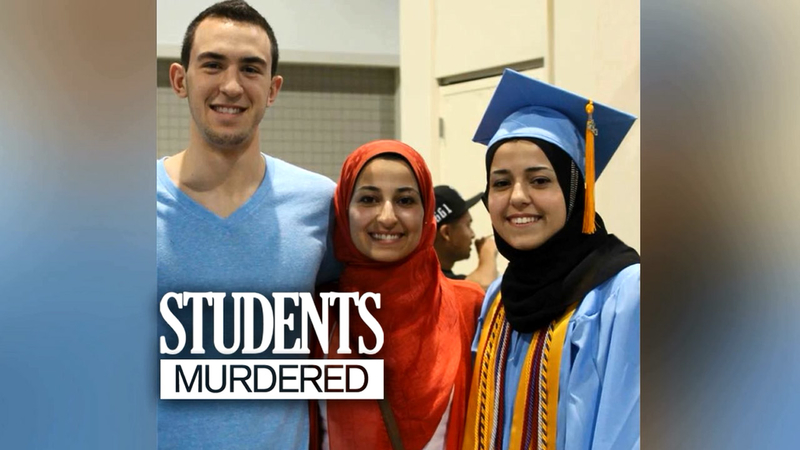 Amid chanting, men carried three caskets on their shoulders into the N.C. State University soccer complex in West Raleigh.

The 5,500 mourners were not all Muslims. Muslim leaders from across the nation who attended called on them to address what they see as a wave of Islamophobia in America.

"We are concerned that the rising anti-Muslim rhetoric in our society may have encouraged some to commit violence against American Muslims," said Azhar Azeez of the Islamic Society of North America. "So we urge the law enforcement to investigate this case as a possible hate crime."

The father of the sisters who were murdered said he cannot believe that his daughters were executed simply because of a dispute over a parking space.

Also at the event were many dignitaries, including the chancellors of both N.C. State and the University of North Carolina at Chapel Hill.

Among the non-Muslims was David Morrison an N.C. State senior who says Deah Barakat was his dental school mentor. Morrison, who will attend East Carolina University's Dental program, said he is devastated by the murders of Barakat and Barakat's new bride.

"They were two of the most amazing people that I have ever met. And my goal here was to honor them and to dedicate what I'm doing. Like I want to be the man that Deah was. I want to be, I want to be the dentist that he was going to be," Morrison said as tears streamed down his face. "I hope that people can look past and just understand that the air we breathe is the same air. My heart beats just like Deah's heart beats."

One Muslim leader sounded a conciliatory tone. Naeem Baig of the Islamic Circle of North America said he hopes the tragic deaths won't be in vain.

"We are saddened but at the same time we feel that what they have left for us is much greater and bringing us together," said Baig. "And we will continue with the efforts of peace and love and sharing with one another."

Just before the funeral got underway, Chapel Hill Police Chief Chris Blue and U.S. Attorney Thomas Walker addressed the media along with leaders from the Muslim community.

Walker wanted to show his support for the victims' families.

"We are here to show our solidarity with this community in their time of pain," Walker said. "It is important, very important that we all understand and know that law enforcement is here for the entire community."

Blue acknowledged the day was for grieving, but he also wanted to reassure the families of the three young students who were murdered, he is working to exhaust every lead and every angle of the investigation.

"I do want to take this opportunity and I won't speak much about the investigation today at all cause this is a time to be together," said Blue. "I would just recommit that we are examining every possible investigative angle to include the potential for hate crime."

Thursday evening, the FBI released the following statement: "The FBI is continuing to provide assistance to the Chapel Hill Police Department to process evidence related to a triple homicide investigation. The FBI has also opened a parallel preliminary inquiry to determine whether or not any federal laws were violated related to the case."

Meanwhile, Chapel Hill investigators returned to the scene of the crime with an ATF agent. Authorities won't say why, but the federal agency is known for investigating firearms and explosives.

"He was well known in the neighborhood. He was notorious," said resident Samantha Maness.

Hicks was hyper-vigilant about towing, according to his wife. She says he considered it his personal mission to keep the lot in the front of his condo in order.

"He said fine, 'I'll take care of my lot. I'll be the champion to make sure that the residents have a place to park,'" Karen Hicks recalled. "At one point, they took away all of our towing privileges."

His obsession with parking played out in a December 2013 incident. Hicks is listed as an eyewitness to an assault on a tow truck driver. He called police.

While investigating clues of a possible hate crime, police blame an ongoing parking dispute for the murders.

One longtime resident claims one of shooting victims came to his door three weeks ago, asking him to move his car so that she could switch parking spaces. He worries it may have been a warning sign of what was to come.

"She seemed pretty shaken up. She asked if I could move my car one space over," said Shadi Wehbe. "Someone had left a nasty threatening note on her car telling her to move it. I didn't ask her for details about what the note said. Wish I had at this point."

A vigil is being held Thursday evening at NC State for the victims.