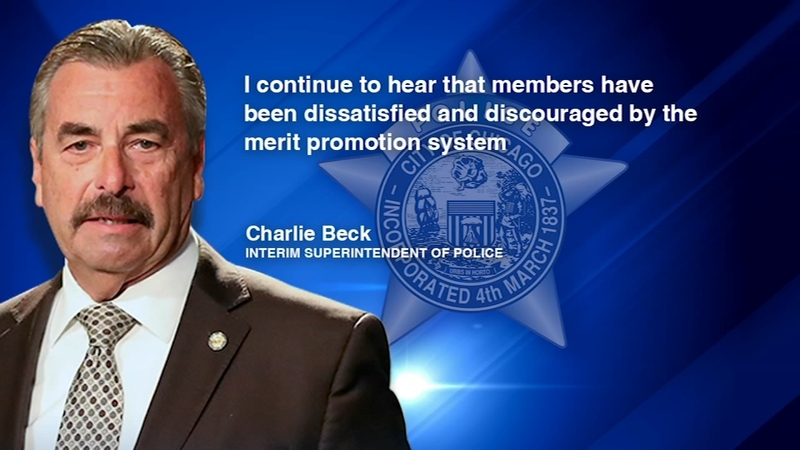 CHICAGO (WLS) -- Chicago's interim police superintendent is getting rid of the merit promotion system that has been criticized as rewarding officers for who they know, not how well they can do the job.

This system has been around for more than 20 years. It started under Mayor Daley in an effort to promote diversity in police leadership. But now that's on hold and some alderman are crying foul. But Mayor Lori Lightfoot said Interim Supt. Charlie Beck did the right thing.

Beck was at City Hall to meet with some aldermen Wednesday afternoon after notifying police officers by email that the merit system of promotions was being discontinued.

"While I was pleased to see that so many of you have registered to take the Sergeant Promotional Examination on Saturday, I continue to hear that members have been dissatisfied and discouraged by the merit promotion system," Beck said in the email.

So after consulting with the mayor and the Fraternal Order of Police, Beck said he will not make any merit promotions, and will recommend his successor not use the system either. Lightfoot called it a bold and important move.

"I think that we have heard from officers on an anecdotal basis, but also in officer surveys, that they don't have confidence in a merit promotion process," Lightfoot said.

But there was pushback from the chairman of the City Council's Public Safety Committee, 29th Ward Ald. Chris Taliaferro, as well as the mayor's own floor leader, 36th Ward Ald. Gil Villegas.

"If we want to continue to have minorities represented - and that's Hispanic particularly and African-Americans - represented on our police department, as supervisors in a capacity that is reflective of the city, you cannot get rid of merit," Taliaferro said.

"It has allowed the commanders that are actually working with those sergeants and police officers and opportunity to, if they're not testing well, at least based on their merit and the work that their performing have an opportunity to get promoted," Villegas said.

Paul Bilotta, president of the Chicago Police Sergeants Association, said he's fielded a lot of a calls supporting Beck's decision. He added that merit promotions need to be done blindly by a third party because the system has become political.

"The system became a gift system. You know how this works, Craig," Bilotta said. "It was who you knew in the city, who your friends were, who your clout was, and it's a horrible thing to say but that's what happened. It wasn't used the way it was intended to be used."

The mayor said it's important that the tests don't have an adverse impact on promotions, adding diversity is important. But she says there needs to be changes in the system.

"So it's just gone sideways," Lightfoot said. "We need to get back to its essence and make sure that we are promoting people who really deserve to be in leadership in within the department."