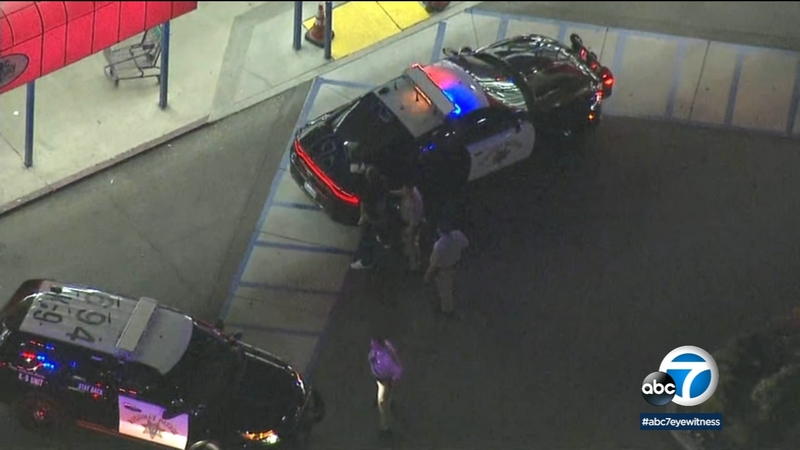 SOUTH GATE, Calif. -- A domestic violence suspect led authorities on a wild and dangerous chase with a hostage passenger for three hours across Los Angeles and Orange counties Wednesday.

It finally ended when the suspect pulled into the parking lot of a 99 Cent Store in Rowland Heights and ran on foot inside the store.

Customers were seen fleeing from the building as officers followed with weapons drawn. They took him into custody within minutes inside the business.

The suspect was spotted hitting his female passenger while fleeing from law enforcement in several cities such as South Gate, Huntington Park, Lynwood, South Los Angeles, Buena Park and Anaheim.

The driver sped recklessly on surface streets and freeways, at times driving on the wrong side of the road and on sidewalks.

A suspect wanted for domestic violence flees from police.

The suspect at one point reached a dead-end at a park, but instead of surrendering, he drove on a park trail and blew through a gate, narrowly missing pedestrians.

The female passenger was spotted at times struggling with the driver. Her legs were later seen stretched out onto the vehicle's dashboard as the suspect continued leading the hourslong chase.

After the pursuit ended, she was found unresponsive in the parked suspect vehicle but was able to get out and walk to a stretcher. She was taken to an area hospital and is now considered to be a hostage in the incident.

#LIVE Suspect is in silver Honda Accord; some reports indicate there is a female passenger in the front seat and driver has been assaulting her during pursuit https://t.co/0v3h9TTXtx pic.twitter.com/GdmzitKAZ8

The suspect got onto the 710 Freeway, where he drove in the emergency lane. After getting stuck in some traffic, the driver got back onto surface streets in the Lakewood area.

Patrol vehicles continued to follow close behind in the Bellflower and Norwalk area as the driver blew through red lights and stop signs.

While in Buena Park in Orange County, the suspect drove into a parking lot before getting back onto surface streets at high speeds. The driver then drove on a sidewalk in an attempt to evade authorities.

A suspect wanted for domestic violence drove over sidewalks and toward oncoming traffic to flee police in a chase that started in the South Gate area.

The suspect then drove on the wrong side of the road with several oncoming vehicles nearby.

Patrol cars appeared to temporarily go on surveillance mode as the suspect continued to drive dangerously.

Several patrol vehicles soon re-engaged in the chase as the driver made sharp U-turns in the middle of intersections in Buena Park. The suspect then made his way into Anaheim and Garden Grove, narrowly missing cars in intersections filled with rush-hour traffic.

The suspect made his way onto Huntington Beach surface streets, making several U-turns and blowing through intersections and at times waving at people.

The chase continued on the 22 Freeway in the Los Alamitos area before the suspect made his way onto the 605 Freeway. He drove through the Cerritos and Norwalk areas as patrol vehicles followed closely.

The suspect got onto the westbound 105 Freeway before getting off on surface streets in the Lynwood area. While in or near South Gate, the suspect slowed down and the passenger door briefly opened.

The chase continued as the domestic violence suspect appeared to be arguing and fighting with the passenger. The suspect made his way onto the 5 Freeway before getting off toward downtown L.A. California Highway Patrol vehicles got very close at some points, appearing to attempt PIT maneuvers.

A CHP SUV touched the back bumper of the car, but the chase suspect continued into East L.A. and Alhambra. The chase made its way onto the 710 Freeway, which was mostly clear of traffic.