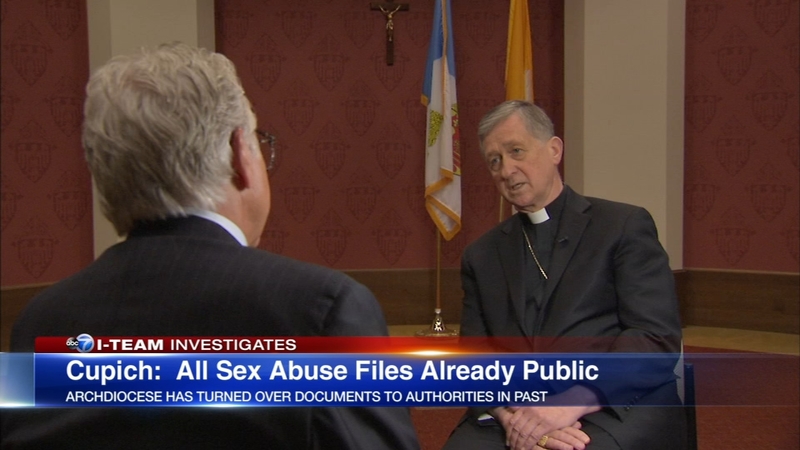 CHICAGO (WLS) -- In a wide-ranging interview on Monday afternoon, Cardinal Blase Cupich repeatedly said he hopes authorities focus on the victims of all abuse -- not just one sector -- and not just priests. Cardinal Cupich, the Archbishop of Chicago, discussed a new church crisis with Eyewitness News investigative reporter Chuck Goudie.

The I-Team last week broke the news that Illinois Attorney General Lisa Madigan was convening a new investigation of how the Chicago Roman Catholic Archdiocese has handled priest sex investigations. This comes in the wake of a Pennsylvania grand jury report that revealed at least seven accused predator-priests with links to Illinois were among 300 clergymen called out by authorities.

"In fact, all of our records that she would like to see have already been released anyway. All the names of individuals who have credible accusations against them have been released to police," said Cupich.

Cardinal Cupich says he encouraged the attorney general that "the message has to be that we as all in the adult community have to be concerned with child safety. So, that's not just the Catholic Church, it's in other churches, with our schools, all the schools," said Cupich.

He continued, "child abuse happens in other institutions as well and my hope would be that if we're really serious about making this about child abuse then we would have to be sure that all entities that treat children, that educate children would go under the same rigorous investigation, having their files released as well." Cardinal Cupich told Chuck Goudie he hopes the state's new clergy abuse hotline would be a hotline for any victim of abuse, not just focused on bad priests.

The attorney general's new hotline is 1-888-414-7678 and open for anyone in Illinois to report sexual abuse allegations against clergy members. Information may also always be provided to the I-Team at 1-312-750-7TIP or by email to iteam@abc.com.

Now, Attorney General Madigan tells the I-Team that her office has received more than 20 calls from potential victims and church insiders who she says are fed up with the status quo.

"I made it clear in the aftermath of the Pennsylvania grand jury report, we have a significant concern that there may be records and documents that have never been revealed that would indicate that there were priests who engaged in criminal sexual conduct against minors," said Madigan. She says one thing that her investigation will be looking at is whether abuse case records were destroyed or remain hidden in Chicago or at any of the other five Roman Catholic dioceses in the state.

Cardinal Cupich adamantly denies that there are files hidden away here at the Archdiocese of Chicago, despite what Illinois Supreme Court Justice Anne Burke told the I-Team last week. Justice Burke told the I-Team that during a national church investigation 15 years ago she had been told there were secret files in Chicago.

"We don't have secret archives where we have put files that should be handed over to the police or names that we know of individuals, have not been reported to the police, we do not have those and I want to be absolutely clear about that," Cupich told the I-Team. He says when he arrived in Chicago he ordered a forensic investigation to look at archdiocese files and make sure all priest sex abuse files have already been made public or turned over to authorities.

Chuck Goudie: If all of the files from the archdiocese are already out there, what would it be that she would want?

Cardinal Cupich: No, I think maybe she wasn't aware of what we have done with the local authorities here.

Cupich also points to the release of clergy sexual misconduct files archdiocesan officials posted on their website before he became Chicago's archbishop.