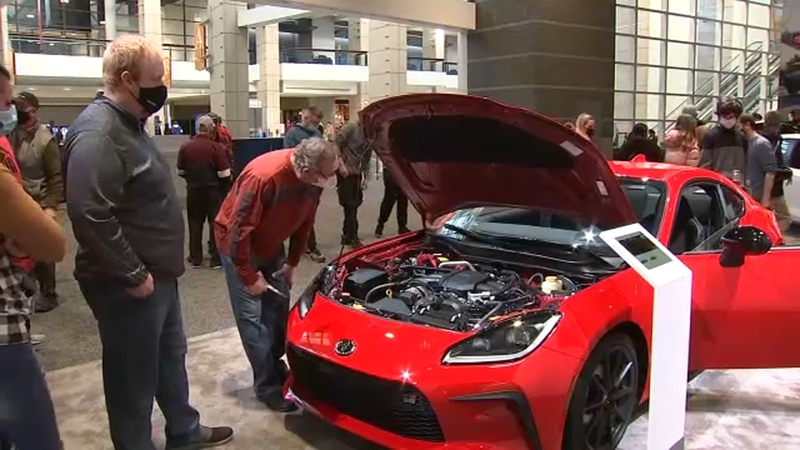 Attendees will notice fewer cars on the showroom floor this year because of industry shortages caused by the COVID-19 pandemic.

There are nine interactive tracks where people can get behind the wheel and test things out themselves, along with a number of concept cars and electric vehicles to check out, Haggarty said.

Attendees can avoid that traffic heading in, as CTA and Metra will carpool guests to McCormick Place from several locations through Monday.

Masks are required for all attendees age 2 and over, except when eating or drinking. Proof of COVID vaccination is not required for admission, but is required for designated food and beverage areas.

First Look for Charity broke out the black tie and gowns for its 30th anniversary Friday night. Haggarty said the event raised $1.5 million, saying "the dealers couldn't be more proud."

"It is so great to be able to be back," attendee Larissa Gasinski said. "Last year we didn't have this coming back. This year, it almost does feel like we are back to normal in a sense."

There were a lot of grins as people enjoyed food and drinks and an exclusive look at the 800 or so vehicles on display at this year's auto show. The proceeds from each $250 ticket go directly to 20 charities.

Mary Jane Goldthwaite, who was supporting Special Olympics Illinois, said the money raised will go "to help promote more inclusion and family participation and engagement, to come out of the COVID where there are no activities and games, to get the athlete back out there and playing and earning their medals."

First Look has earned Chicago charities some $56 million since 1992. As is tradition, the Chicago Automobile Trade Association gave away two cars as well.

But beyond the glamor this year was a universal hope: that some semblance of normal life is returning.

"It is just amazing and it lifts your spirits to see everybody happy and out again," attendee Diane Woznicki said.

Preview Day Two at the Chicago Auto Show began by highlighting women in the automotive industry at the What Drives Her awards ceremony.

"We really want to bring to light all the wonderful traits and aspects that these eye women have and the fantastic roles these women have within their own organizations," said Jennifer Morand, Chicago Auto Show director of public relations.

One of those women showed, Bronco chief engineer Jolanta Coffey, demonstrated the ins and out of the special edition Bronco Everglades, a vehicle capable of adventure deep in the wilderness.

"I've been at Ford as an engineer for 25 years, I spent a great amount of time in my career working in the engineering world primarily designing the interior of vehicles," Coffe said.

This year's show is admittedly a bit smaller. With only one show floor and a few less manufacturers, they're making up for it with more and larger test tracks, like Camp Jeep Mountain.

Electric vehicles are packing the 2022 Chicago Auto Show as just about every car manufacturer looks to a zero-emissions future.

And you'll notice a lot more electric vehicles at this year's show.

"We're seeing a transition from traditional gas and hybrid vehicles to all-electric vehicles," said Mark Bilek, director of communications for the Chicago Auto Show. "Nearly every manufacturer has an electric vehicle on the floor this year."

Manufacturers like Kia are making that commitment to electronic vehicles. In fact, half of the cars they're showcasing at this year's show are electric.

"We know the future is going to be a zero emission future and we are looking to get there first," Kia spokesperson Jeff Jablansky said.

As companies push for the future of electric cars, they're also still dealing with an industry-wide problem forced by the pandemic: product shortages. Those shortages are impacting the show this year, with fewer vehicles on the floor. It's also caused prices to skyrocket for customers looking to buy, as manufacturers are anxious to ramp up production again.

"We hope that the situation with the semi-conductors is going to be under control in the future, but we can't put a date on it yet," Jablansky said.

The latest tension at the U.S.-Canadian border near Detroit is also holding up products that auto manufacturers need to continue production.