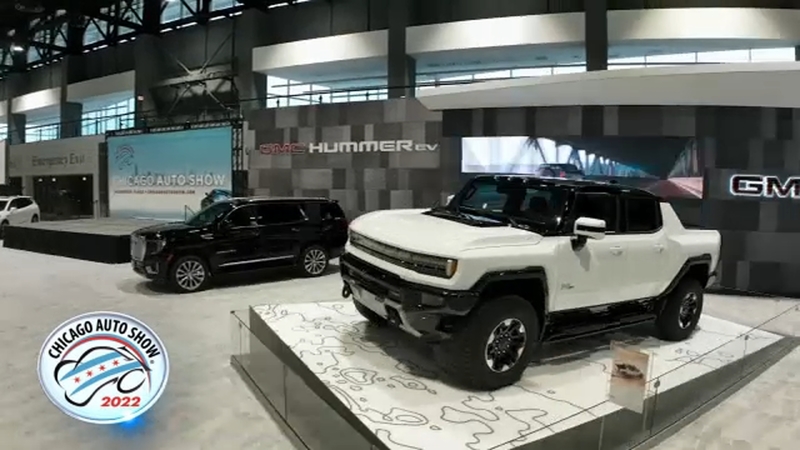 ABC 7 PRESENTS THE "2022 CHICAGO AUTO SHOW," hosted by Jim Rose and Ryan Chiaverini at McCormick Place, is a live, hourlong special spotlighting all of the bells and whistles that come with some of the most magnificent cars, trucks, SUVs and EV's (electric vehicles) the industry has to offer. ABC7's Tracy Butler, Roz Varon and Val Warner will also contribute. An encore broadcast of the live special will air later that evening at midnight and again on Saturday, Feb. 19, from 4:00-5:00 p.m. on ABC7.

"It's great to renew traditions and team up with the Chicago Automobile and Trade Association for the February return of the Chicago Auto Show, said John Idler, President & General Manager, ABC 7 Chicago. "Like many of the vehicles on the show floor, we are electrified to bring the official Auto Show preview special to our viewers. We also want to recognize Chicagoland Auto Dealers as they continue to support countless charities in our community ... now more than ever."

This year's auto show does promise to be electrifying, and auto show fans will get the inside track on what the Electric Vehicle (EV) test track experience is like. Tracy Butler will also take auto show fans to EV school for an informative lesson on what future buyers need to know before buying an EV.

Some of the hottest and most technically innovative cars will be showcased during the special including the GMC Hummer EV, the Chevy Corvette Z06 and the Ford Bronco family of vehicles. Val Warner will hit the city streets of Chicago and test drive KIA's new offering, the EV6. This year's show goes beyond the confines of McCormick place with attendees getting the opportunity to jump in a vehicle and drive the city of Chicago streets in style.

"While there were many wonderful aspects of our summertime 'special edition' show, we're excited to return to February as it's historically been an ideal time for consumers to get out and beat the winter doldrums by experiencing all the Chicago Auto Show has to offer," said Chicago Auto Show Chairman Bill Haggerty.

In addition, ABC7's on-air team will take a trip down memory lane and reminisce about their first car while also revealing what their dream car is today. The Auto Show special will be broadcast live on ABC7's 7.1, available on the ABC7 News App and will also be available live and on demand on ABC7Chicago.com.

About ABC7/WLS-TV Chicago
ABC7/WLS-TV Chicago is the No. 1 local news source and most-watched television station in Chicago. With top-rated daily newscasts spanning decades and the largest social media presence in the market with more than 2.6 million Facebook followers, ABC7 Eyewitness News provides breaking news, investigative reporting, weather, politics, traffic and sports in the multiplatform space to Chicago, the suburbs and northwest Indiana. Named Best News Operation by the Associated Press for four consecutive years, ABC 7 Eyewitness News produces "Chicago Proud," a series of features that spotlights everyday heroes in and around Chicago. The station also produces the highest-rated New Year's Eve special in Chicago, holiday kickoff special "The Magnificent Mile Lights Festival," syndicated to a national audience, as well as the award-winning program series "Our Chicago," which showcases the city's diversity and highlights contributions in the Black, Hispanic, Asian, LGBTQ+ communities, among others. Every Friday, Windy City Weekend, entertains while giving Chicagoans everything they need to know about what's happening in the city. ABC 7 is the only Chicago station producing and broadcasting parades representing Chicago's rich cultural history. In addition to producing town halls focused on current social issues, the station has a long and proud tradition of broadcasting political candidate debates keeping Chicago's electorate informed. ABC7's outreach efforts include annual partnerships with the Red Cross for life-saving blood drives, one of the biggest one-day drives in the country and, most recently, spearheading an effort to raise more than $1.5 million for area food pantries.