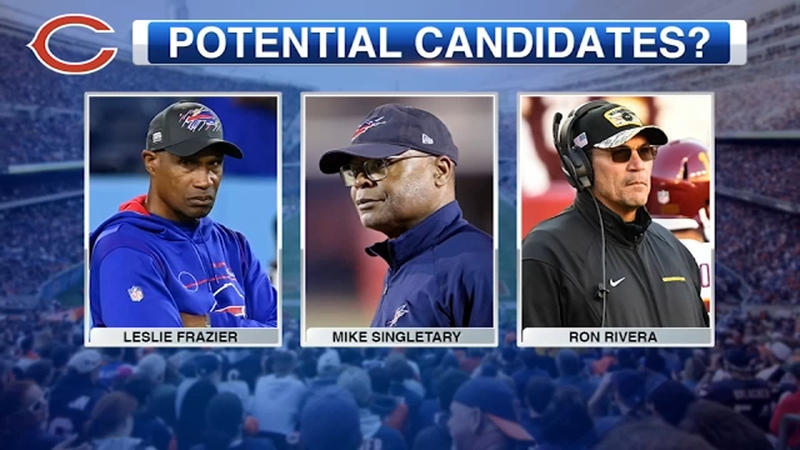 CHICAGO (WLS) -- The Chicago Bears could face pressure to hire someone from a minority background for the head coaching job.

At the start of the 2021-2022 NFL season the league only had five head coaches of color. Now that's down to four.

"I think the Bears are under a league pressure on this Black Monday with only a couple of head coaches are Black," said Exavier Pope, a sports legal analyst and host of #SuitUp Podcast.

"No one is saying you need to give these jobs for free but just go and look for good candidates," said Martenzie Johnson, sports writer for "The Undefeated."

There is a lot of speculation on who could be the next coach. Only three players from the Bears Super Bowl championship team have NFL head coaching experience: Leslie Frazier, the defensive coordinator for the Buffalo Bills, Hall of Famer Mike Singletary and Ron Rivera, the current head coach of the Washington Football Team.

"I think it is interesting that George McCaskey is on the NFL Diversity Committee," he said. "I think they are quite mindful of this situation and will do more than token efforts."

According to The Institute for Diversity and Ethics in Sport at the University of Central Florida's 2021 NFL Racial and Gender Report Card the percentage of NFL head coaches of color increased from 12.5 percent in 2020 to 15.6 percent in 2021.

"Since 2020 there has been more of a focus on systemic racism and how you get over that is actually putting Black people in position in power," Johnson said.

Pope said with the demographics of the league there should not only be more Black coaches, but also more Black general managers.

"We should not have an image where you can entertain us and labor for us, but you can't have the intellect to lead us," he said.

McCaskey, chairman of the Bears, revealed Monday that the team's senior vice president of diversity, equity and inclusion Tanesha Wade will be one of those involved in helping select the new general manager.