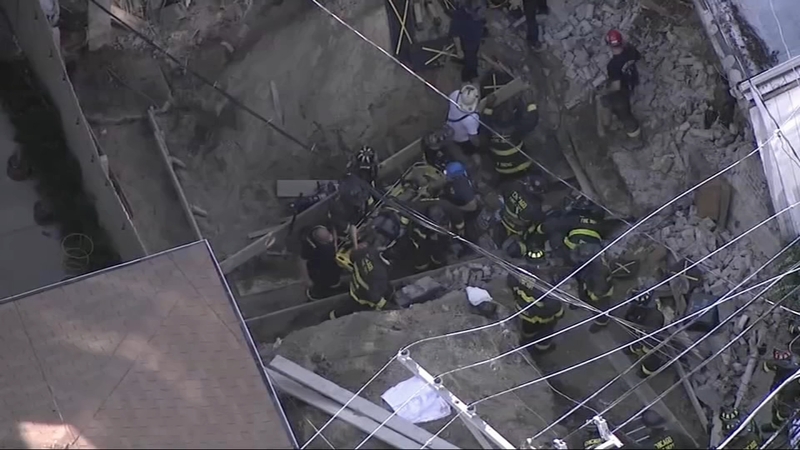 Firefighters freed a man whose legs were pinned in the rubble of a collapsed garage in Chicago's Lakeview neighborhood Friday.

Chopper7 was over the scene in the 3200-block of North Wilton Avenue around 4:30 p.m as firefighters worked frantically with shovels and other equipment to free the man from the rubble. The victim pulled out on a stretcher was clearly in pain, but lucky to be alive.

Ellen Hughes and Liz Zaborsky were among the neighbors who called 911 after hearing a loud boom, rushing outside and encountering the heartbreaking scene.

"Lots of debris fell on the man and trapped his legs, and all his friends were trying to help him get out," Hughes said.

Neighbors said a construction crew had been doing excavation work for an underground parking garage for a newly-built apartment building and was digging next to an adjacent property's garage when the brick structure collapsed, raining debris into the 10-foot-deep trench.

Firefighters arrived quickly and began working to free the man while also shoring up the still-unstable garage.

"The garage is still falling, and so they're risking their lives down there getting him out," Hughes said.

"Had to be at least 15 fire trucks, and just so many people trying to get the poor guy out, and it was just, honestly, it was amazing," Zaborsky said.

After half an hour, the man was pulled to safety, placed on a stretcher and rushed to the hospital.

"It was the scariest thing I ever saw," Hughes said.