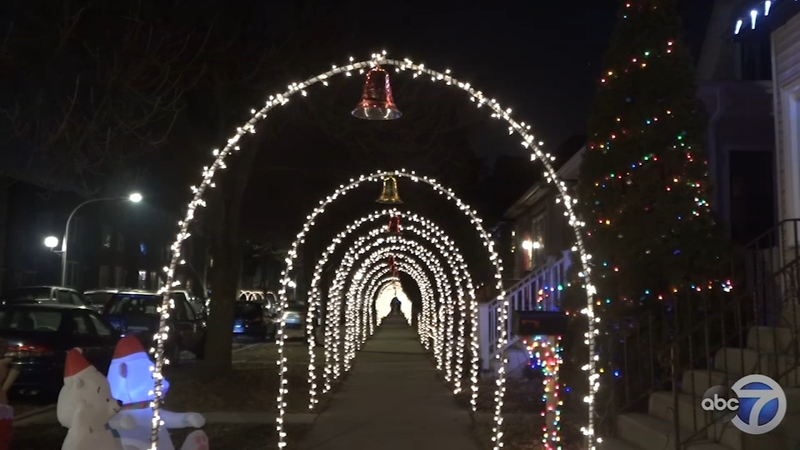 CHICAGO (WLS) -- The 4100 block of N. Francisco is a little brighter than most this holiday season.

"Little kids love it, they love looking at the lights. It's like a tunnel of love," neighbor Arthur Harris said.

More than 80 white arches line the sidewalk of the block.

"We didn't think it would take off like it did," builder, George Heitz said. "Never in my wildest dreams did I think we'd get every single house."

The 4100 block of N. Francisco has been turned into a Winter Wonderland.

Heitz and his next-door neighbor, Ignacio Martinez, made the first four arches for themselves last year.

"George always puts up this big display of decorations and he was running out of room so I told him he could put them on my yard," Martinez said. "I saw in a suburb somewhere, an arch in the daytime, I said we can do that."

This year, the original four arches turned into six, then seven and soon, neighbors wanted in on the action.

"I saw how wonderful it was and I came across and said 'not only do I want some, but we should probably do it for the whole block because that would look awesome'," Harris said.

So Harris made up a flyer and started going door to door with signs and told neighbors about what he, Heitz and Martinez were trying to do.

That was the week of Dec. 1. Now almost three weeks later, the entire left side of the street is covered in arches.

"It's just so wonderful to see the Christmas spirit embodied on our block," Harris added.

The arches brought holiday cheer, but they also brought a little something extra - an appreciation for community.

"The block is great and everybody was so friendly, especially when we were building them, everybody was outside," Heitz said. "Now we're talking about a block party for next summer. It really brought the block together."