Magnificent Mile violent crimes are on the rise; association calls on state's attorney to prosecute 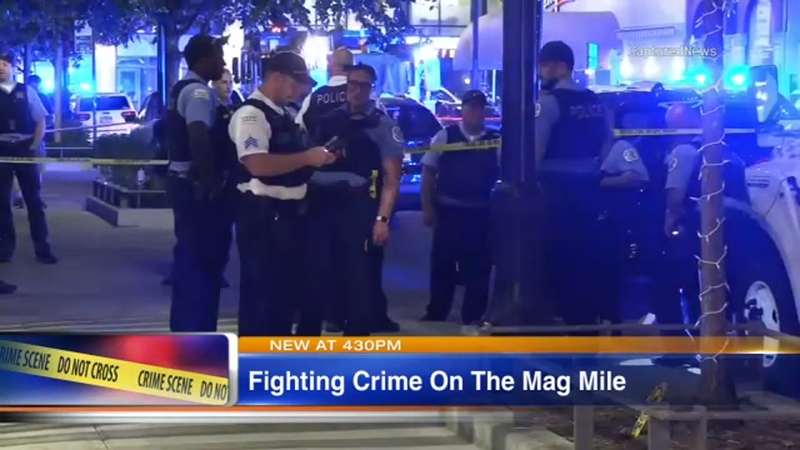 Violent crimes are on the rise on the Magnificent Mile; association responds

CHICAGO (WLS) -- Violent crimes are on the rise on Chicago's Magnificent Mile, and that's prompting action from an influential organization that has long touted the shopping district.

Kimberly Bares, the President and CEO of The Magnificent Mile Association, said after recent criminal activity, the organization is stepping up to the challenge.

"Violent crime has been up and that's what has us concerned," Bares said. "Carjackings, recovery of guns, some shootings -- those kinds of things."

Recently, there have been robberies, carjackings, smash-and-grab burglaries, and even a shooting near the Magnificent Mile. On Thursday afternoon, thieves swiped coats from Canada Goose in the latest criminal case.

The office of Cook County State's Attorney Kim Foxx responded in a written statement, which said in part: "Public safety is the top priority of this office, and we will continue to hold those accountable for driving the violence in our communities when police make an arrest and charges are approved. The CCSAO remains committed to working with our law enforcement partners to address violence and crime and will continue to prosecute criminal cases based on the law and the evidence as we strive to increase safety in our communities."

Violent crime is rising in zip code 60611, which includes the Mag Mile, according to CPD data, but it still has a lower violent crime rate than the city.

So far this year, 30 violent crimes have been reported in the zip code, which is up from 22 for the same period last year.

Shoppers are concerned about the rising criminal statistics.

"I generally feel safe down here. However, I worry about the crime," said Geoff Peters, a concerned shopper.

Ishaan Kohli was shopping on a recent winter afternoon. He lives nearby and has taken note of the increased crime.

"It's getting pretty bad," he said. "All these stores getting hit. You don't want to be in that situation."

Bares said it's critical to keep the Magnificent Mile attractive, viable and welcoming, and she quickly points to statistics that prove her point. She added the district generates $2 billion dollars a year in property taxes, 20% of Chicago jobs are in the area, along with two-thirds of Chicago's hotel rooms.

"When I start to put those statistics together, I think people then understand why this district is so important," Bares said.

When asked about the increasing crime rates, Mayor Lori Lightfoot's spokesman had this written response, in part, stating: "Public safety requires partnerships between government, business, and community and Mayor Lightfoot remains firmly committed to continuing and strengthening these partnerships."

While fighting crime wasn't part of The Magnificent Mile Association's focus in the past, it is now.