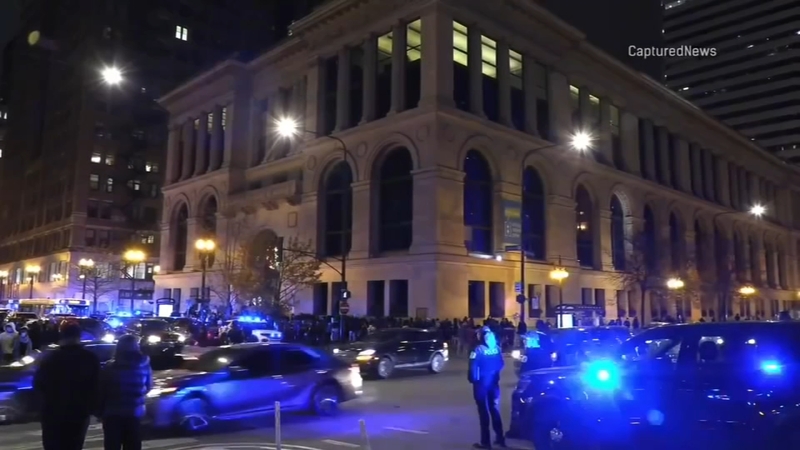 Chicago police have toolkit to prevent repeat chaos in the park

CHICAGO (WLS) -- There won't be a repeat performance of last weekend's mayhem in Millennium Park, according to a Chicago police plan obtained Tuesday by the ABC7 I-Team.

The I-Team on Tuesday learned that CPD officials are putting an array of tools in place to deal with vandals, fights, shootings, and hooliganism that turned Saturday night into a free-for-all.

In the toolbox that police brass have stockpiled is the possible closure of downtown streets, restricting entry to the lakefront parks and Michigan Ave. That would be nearly a last resort and concrete plans to do so have not been made or announced, according to police sources.

An internal CPD memo obtained by the I-Team was send to commanders Tuesday afternoon and includes details of a plan to prevent what happened last weekend from happening again. In addition to canceling officers' days off so more uniformed police can flood downtown streets, commanders are being told to review CPD's months-old plan for closing off the central business district.

They are trying to prevent the chaos and commotion in the heart of downtown last Saturday night. Police arrested 21 young people, and several police officers and others were hurt in a melee that spilled over from parks into streets and intersections.

A 15-year old boy was shot and wounded while walking on Wabash Avenue and a CTA bus driver was attacked, beaten and injured during the hours of skirmishes.

The new internal CPD memo instructs commanders citywide on how to staff-up for the weekend, cancel days off, overlap shifts, assign special patrols to retail corridors and "In the event of civil unrest and looting, area deputy chiefs and commanders should identify mobilization points" for officers.

"I was very happy to see the identification of mobilization points" said local law enforcement expert Bill Kushner who added that these mobilization meeting spots "would indicate to me that they are going to use large vehicles to transport officers downtown." Kushner is formerly the police chief of suburban Des Plaines and a frequent I-Team law enforcement consultant.

After reviewing the CPD plan for the I-Team, Kushner told us that "Eisenhower said 'in battle planning is useless. But having a plan is priceless'."

Kushner noted that Chicago police are facing a personnel shortage along with many other departments across the country and are challenged by emergency deployments for large scale, violent crowds.

One option in the memo obtained by the I-Team is entitled "Central Business District Emergency Closure Procedures." If needed, the Loop and Magnificent Mile would essentially be cut off, as they were during the post-George Floyd unrest.

Kushner, who now works with P4 Security Solutions, said the expressway and road closures wouldn't be as crucial as closing down public transportation, that he says is how many of last weekend's troublemakers traveled to downtown.

"It would be to close the CTA stations and not let anyone off the trains in the Loop or the immediate vicinity of Roosevelt Road, even from Cermak north" said Kushner. "To block off those stations so that there's no way to exit from the train. That would be number one. If you're going to shut down the Loop, you're going to raise the bridges over the river and you're going to contain everything south of the river."

The bridges have been raised and used as iron blockades during past civil disorder in Chicago to prevent throngs of looters and vandals from moving between sections of the downtown.

Former police chief Kushner says the warmer weather forecast for this coming Saturday night is especially concerning to law enforcement because it may attract large crowds that would otherwise stay indoors.