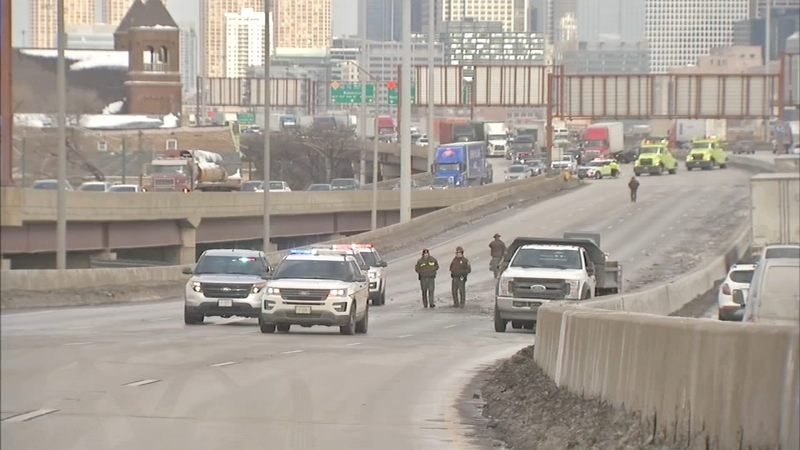 CHICAGO (WLS) -- Hoping to curb rising crime on Chicago expressways, Gov. J.B. Pritzker and the director of Illinois State Police held a news conference Monday to spotlight arrests that have occurred since patrols were increased and more surveillance cameras were installed.

But as they spoke, a person was shot on the Dan Ryan Expressway at Canalport near downtown - the 14th person shot on an expressway in Cook County this year. No arrests were reported.

"This is our territory, this is our problem, this is our challenge to meet," Illinois State Police Director Brendan Kelly said. "We are going to defend expressways from this type of violence."

Since the start of the pandemic, state police said they have seen a dramatic increase in shootings on Chicago area expressways. They say in part that's because a lot of time gang bangers, often spurred on by social media threats, take their disputes to the expressways, thinking they can avoid cameras on neighborhood streets in the city.

"Almost like a main street in the old West, they're using the expressways for this violence," Kelly said.

In response to the increased crime, state police said they have increased the number of officers patrolling those areas and also beefed up technology. And they are getting results. They announced 20 arrests in the last four months for charges including murder, attempted murder, involuntary manslaughter and weapons charges.

"Anyone thinking of committing a crime on our expressways is on notice they are more likely than ever to get caught," Gov. JB Pritzker said.

State police said they have installed about 100 license plate readers on the Dan Ryan Expressway, and they say they likely captured the suspect involved in this latest shooting.