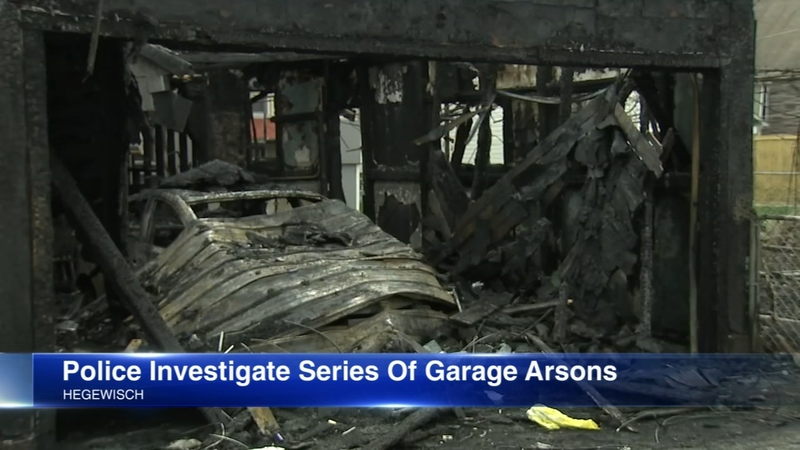 CHICAGO (WLS) -- Chicago firefighters were called out to more burning garages in the Hegewisch neighborhood Monday morning and police said arson is to blame.

Neighbors said they feel like they are being terrorized after several apparent arsons occurred on Saturday and an additional string of fires Monday morning.

Firefighters chased the latest fires at 13512 S. Buffalo Ave. at about 12:06 a.m., destroying a garage, damaging multiple others along with electrical and cable supply lines.

Nicholas Vega is hoping whoever is setting these fires will stop.

"It's terrible," he said. "Somebody's either really a pyromaniac or some kids, maybe they're bored."

Vega lives three houses down near 135th Street and South Buffalo Avenue. He was sleeping when his daughter woke him up just after midnight.

Several trash bins in the alley were set on fire. The flames spreading to a garage and multiple others along with electrical and cable supply lines.

This adds to the list of fires from over the weekend in the same area.

The entire back alley near 133rd Street between Burley and Buffalo avenues was engulfed in flames on Saturday night. The fire spread to at least five garages, destroying a lot of property in its path.

Police said someone intentionally set fire to these the cans in the back alleyway.

"Fires set in 45 minutes. They just drove through and set all the trash cans on fire," said resident Torence Ake.

Other streets in the area were also targeted. Neighbors said a box truck was also set on fire. The intense flames burned down the power lines and created dangerous conditions for crews.

Monday at about 8:30 a.m., yet another fire burned about a mile away at 130th Street and Saginaw Avenue inside a vacant commercial building. Police said it's too early to connect it to any other nearby fires.