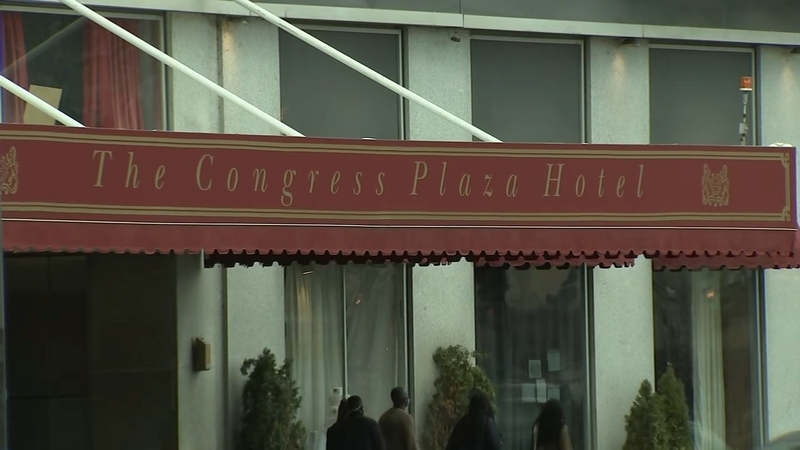 CHICAGO (WLS) -- As sporting events welcome back fans and summer festivals come back, one of Chicago's biggest economic engines is still shut down.

Conventions and hotels are still struggling, but hope may be on the horizon. ABC 7 explains how the two industries are working together to rebuild.

"For me it was very devastating because I was thinking, 'I didn't do anything wrong, why was I fired?'" said Maria Ruiz.

Ruiz said she worked for nearly half her life as a hotel banquet server before she was unceremoniously laid off last October due to the pandemic.

"To be honest, sometimes I don't sleep.'Cause (I'm) thinking, 'what am I going to do next? When is this nightmare going to end?'" she said.

Ruiz, now living without health insurance and on dwindling savings, said she doesn't know how much longer she and her family can hold on.

"I'm not paying my house. I'm afraid I might lose it, you know? My father who's 83 years old lives with me along with my youngest son still in high school. And both of them depend on me," she said.

Ruiz is one of thousands of hotel, convention and hospitality workers who have had their livelihoods stripped away because of pandemic lockdown and lack of business and leisure travel over the past year in the city.

"It's just been devastating, I mean we all remember where we were when we realized that Covid was a big deal, that there was going to be a long-term impact," said Michael Jacobson, President & CEO of the Illinois Hotel and Lodging Association. "That's specifically the case for hoteliers Who remember where they were when they had to lay off tens of thousands of staff across the state."

But through that pain, job experts and the Illinois Hotel and Lodging Association said with more people vaccinated, some of that business will bounce back in just a few months.

"We do know that the first segment of our industry to recover will be leisure travel. People have so much pent up demand and as they get vaccinated and feel safe to leave the house they want to get out and travel," Jacobson said.

The same goes for the convention industry, according to Andy Challenger, SVP at job placement firm Challenger, Gray & Christmas.

"I think we're seeing, as we just start to creep out of it, that people want to go back to their lives as normal," Challenger said. "Some of these major expenses for companies, some of these huge events are very likely to continue."

But for hotels to really come back, conventions need to come back here to McCormick Place and Chicago.

According to the hotel and lodging association, 50% of hotel revenue comes from leisure travel in a normal year. The other 50% comes from conventions, many of which were postponed or cancelled, and take time to plan.

"We really need to know at least three months out that we can open so we can have our exhibitors ready," said Dave Sloan, General Manager of the Chicago Auto Show.

"For a true trade show, it might be 5, 6 months or longer. And that's why you see some of these shows cancelling that are far out. They just can't roll the dice."

But Sloan said after he secures permission from the state and the city, he's eyeing a first ever summer start for the auto show this year.

"We can show the way. And that will open McCormick Place back up and some of these bigger trade shows that really have a huge economic impact on the city of Chicago," he said.

Sloan said a covid-era Chicago Auto Show would have timed ticketed entry available only online, short presentations and faster movement between exhibits, and since it's expected this summer, an outdoor component to cycle people through as safely as possible and make the show even more accessible during the pandemic.

"This is a 2.7 million square feet facility. And it needs to be filled," Sloan said, referencing McCormick Place. "Because when it's filled, you know that the restaurants are humming, and the hotel rooms are going, and there's people coming in from all over the country, all over the world bringing their dollars to Chicago."

The hotel association said it doesn't expect pre-pandemic revenue until 2024, but with a possible boost in business this year, Ruiz is just hoping for her old job back.

"We deserve to go back. We deserve to be part of the recovery too," Ruiz said. "it would mean everything. My monetary security, my health, my life. It means everything."

It's important to note, there's no guarantee workers like Ruiz will get their old jobs back when business picks up again. She is able to reapply, but as if she were a new employee.