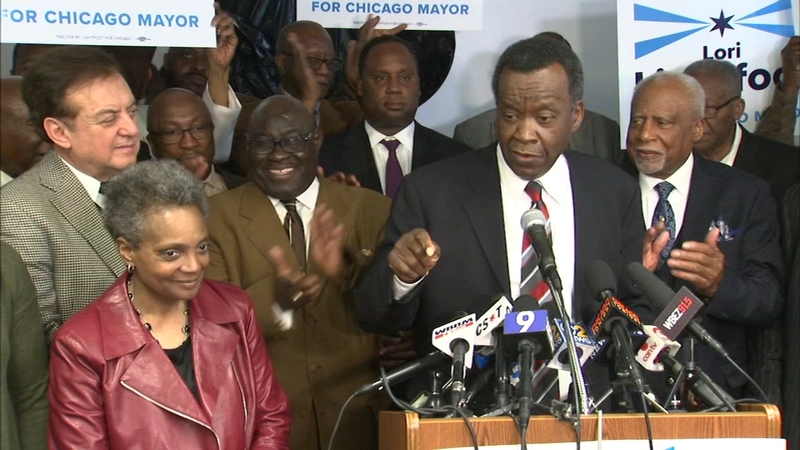 As Toni Preckwinkle and Lightfoot battle for support in the African American community, Willie Wilson couldn't keep his endorsement of Lori Lightfoot secret Friday morning., He made it official Friday afternoon.

Sources say ⁦@LightfootForChi⁩ is expected to get the endorsement from ⁦@DrWillieWilson⁩ today. We expect to hear from Wilson at a news conference this afternoon to get details behind the decision. @abc7chicago pic.twitter.com/NZMUjKSCTi

In what @CityClubChicago reported as “breaking news” @LightfootForChi acknowledges that she is being endorsed by @DrWillieWilson “I am grateful that he is going to be formally announcing his endorsement, (at 1:30 today) and I look forward to working with him”@ABC7Chicago pic.twitter.com/GhSEH7EK5o

"So ladies and gentlemen, I present to you this here, she is the next mayor," Wilson said.

In what appeared to be a peremptory press conference, Preckwinkle assembled dozens of ministers who endorsed her.

"One thing we don't need is for someone to come in who is learning how to be mayor with all of the issues that this city is having," said Dr. Pahlese Binion, president of the West Side Minister's Coalition.

Preckwinkle's campaign leveled allegations that when she met with Wilson, he tried to shake her down for promises of clouted appointments and money to pay off his campaign debt - which she refused to do.

"I think all I'll say is that we had a conversation, and that as a result of the conversation he made a different decision," Preckwinkle said.

Wilson dismissed the allegations as absurd and said he has no need for Preckwinkle's money, suggesting she may have been motivated by not getting his endorsement.

"I got several calls from her to ask me to endorse her, as late as yesterday, so that don't make sense," Wilson said.

Lightfoot blasted Preckwinkle's allegations as an act of desperation.

"When you don't get what you want, you move on. You don't call names and disparage and to try to throw mud as we are seeing today and frankly it's shameful conduct," Lightfoot said.

Wilson asked his supporters to vote for Lori Lightfoot and said he would be working with her, with no strings attached.

The ministers who endorsed Preckwinkle also promised to go door-to-door to help her get elected.

Lightfoot and Cook County President Toni Preckwinkle were the top two finishers in the February 26 election and will be in the runoff election on April 2. Wilson finished fourth in the election, behind Lightfoot, Preckwinkle and Bill Daley.

ABC 7 is hosting a forum in the mayoral runoff in partnership with the League of Women Voters of Chicago and Univision Chicago.