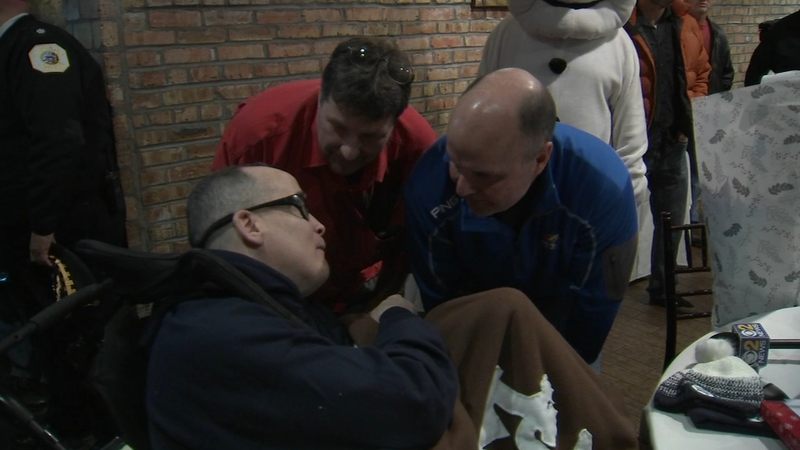 CHICAGO (WLS) -- Chicago police officer Jim Crowley was paralyzed when a car slammed into his cruiser, injuring him and three other officers. After spending the last 20 years rehabbing in Texas, Crowley got a big welcome back in his home district.

Officers in the 22nd District did a special roll call, saluting Crowley for his service in the Chicago Police Department before holding a party in his honor.

"There's a lot of people that would love to be able to see him and haven't been able to because he's been down in Texas," said Gerry Cushing,a childhood friend.

"The way he relates to things, the things that bring him comfort are the things from his past," his sister Beth Carter said. "Those two things are Mount Carmel High School and the Chicago Police Department."

"He was a great policeman when he was out there," Cushing said. "It was a tragedy, what happened to him."

"He's kind of been struggling since to try and find his way in the world, and deal with his injuries," said Dawn Dolan of the Chicago Police Memorial Foundation.

A drunk driver struck Crowley's cruiser in 1987, killing Officer William Morrison and leaving Crowley paralyzed and with a traumatic brain injury when he was just 22 years old.

"When he had his initial injury the physician told us the most he might ever do is blink yes or no," Carter said.

Crowley is cared for in a group home out-of-state, and this homecoming is everything his sister, who is also his caretaker, ever wanted for him.

"I wanted to give him the gift of connection and family and friends," she said. "To be able to give this to him is absolutely the best thing that's ever happened to me."

Monday night was about old buddies reuniting, fellow officers welcoming one of their own home, and celebrating Jim Crowley in Mount Greenwood, the neighborhood he was born to serve and protect.