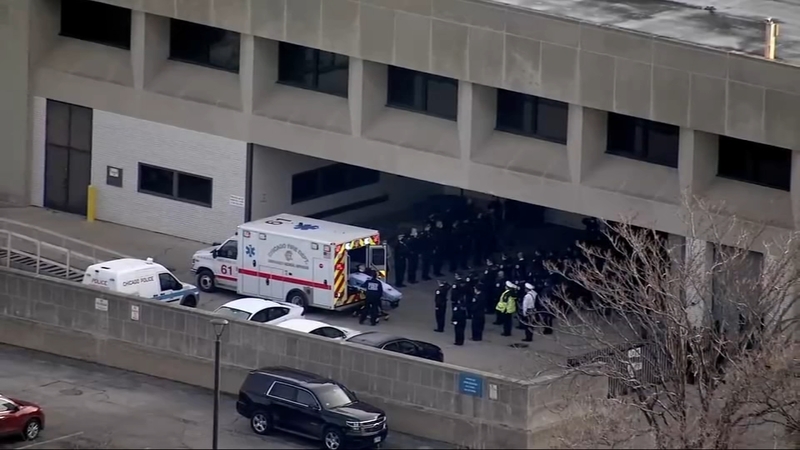 CHICAGO (WLS) -- So far this year, 29 police officers across the country have died by suicide. The problem has been especially rampant in Chicago, where another officer died this week.

The sad news on Monday struck a chord with all Chicago police officers. The suicide of Officer James Daly at the Lakeview police station was among similar tragic ends for other Chicago officers.

"We are woefully unprepared to deal with the physical human stress that it takes upon us and I can say personally, it is a physical feeling," Nigro said.

Nigro knew Officer Daly and knows what he describes as the increasing stresses of the job with 27 years at the Chicago Police Department.

"I'm in roll call," he said. "I can see it on the faces of officers. I can see the physical effect that it has and what it's doing to them, and it's difficult."

Nigro took an unusual step of going public with his concerns. He wrote a letter to the Mayor and Police Superintendent critical of their response after Daly's death and pleading for support.

"I need to say, I don't think we are doing enough here. There is something clearly wrong," Nigro said.

In a statement, Supt. Brown acknowledged that enough has not been done to promote officer mental wellness across the country, and added that he vows to change that and is adding staff and resources.

A spokesperson for Mayor Lightfoot offered a statement that said: "We are committed to working with Superintendent Brown and his leadership team to ensure that Chicago's Police Officers feel supported and valued, and that their mental health and wellbeing is reflected in every aspect of our decision making."

Nigro hopes to inspire more officers to speak up about the stresses and possible solutions.

The brave letter regarding the Chicago Police Department's response to Officer James Daly's death acknowledges what has long been known among members of this Department. Throughout the country, we have not done enough to promote mental wellness among police officers. I hear the same grief and pain within this letter reflected in my many conversations and focus groups with officers of all ranks. That is why I have vowed to change how we support each other - making officer wellness a pillar of my administration. To that end, I have brought on Alexa James to support and implement a comprehensive officer wellness strategy. While her role is new, Ms. James is no stranger to CPD, as she has been instrumental in developing and advancing our officer wellness and crisis intervention efforts as the CEO of the National Alliance on Mental Illness (NAMI) here in Chicago. She brings to the Department years of experience and deep institutional knowledge around mental health and will be engaging our officers to foster a community of wellness at CPD both internally and externally. Together, we aim to bring meaningful change and build a workforce that feels both mentally strong and appreciated. I also want to create a culture where open-ended feedback, like what is contained within this letter, is welcomed, and encouraged. I again offer my sincere condolences to the friends and family of Officer Daly and assure everyone that the subject of officer wellness is never far from my mind
Report a correction or typo
Related topics:
chicagolakeviewsuicidemental healthchicago police department
Copyright © 2022 WLS-TV. All Rights Reserved.
TOP STORIES
Man released from prison after twin brother confesses to murder
75 years after Al Capone's death, it's not your dad's Chicago Outfit
Supreme Court Justice Stephen Breyer to retire
Scientists monitoring new omicron subvariant BA.2
Husband shares journey after losing wife in crash that killed Kobe
CPD investigating apparent Loop burglary at LensCrafters store
School Closings: Chicago Area Complete List
Show More
Death of ISP trooper, wife ruled a murder-suicide
1 dead, 38 missing after boat capsizes near Florida; 1 survivor found
Man denied heart transplant because he has not received COVID vaccine
Man falls on tracks, conductor hurt at Division Blue Line station
Chicago weather forecast includes bitter cold, dangerous temperatures
More TOP STORIES News