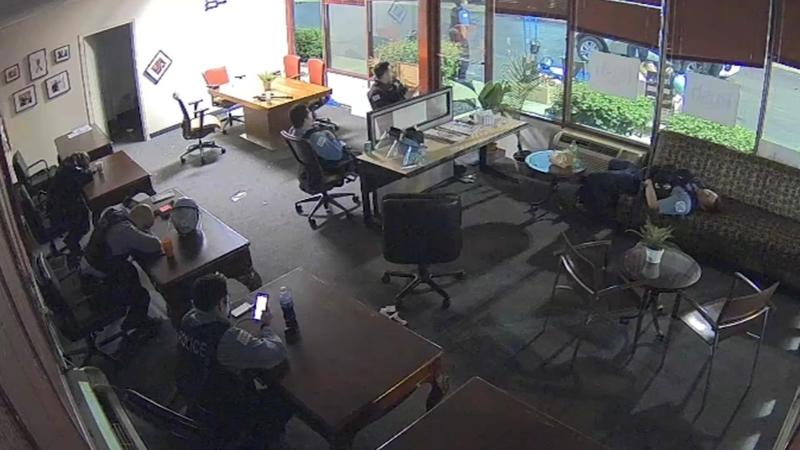 CHICAGO (WLS) -- Chicago police union leader, John Catanzara, tells the I-Team officers were deployed to Congressman Bobby Rush's campaign office after a request for protection from Rush's staffers. Catanzara says the officers were told to make themselves at home.

"Does it look bad. Absolutely. But if you understand the dynamic and you wore the uniform, and you've been in a situation like that, you could easily see how that would occur if that was their assignment to protect that office from being further destroyed. Well then clearly, that was their mission. Were they supposed to stand outside that office for five hours shoulder to shoulder, protecting it from ghosts because there was no one there," said Catanzara.

A spokesperson for Congressman Rush says nobody from his staff contacted police to ask for the office to be protected.

The police officer's union president vehemently objects to any suggestion these officers were lounging while looting was underway. He says the looting had been long over.

A videotape from Congressman Bobby Rush's office shows what the congressman said were police officers "lounging" while looting was going on.

"Everybody was gone, the looting occurred, all afternoon in that mall, there was nothing left. They broke those windows earlier...somebody sent the police there to protect it from being further looted and destroyed. And I'm being told that actually calls came from Bobby Rush's people to go protect the office and make themselves at home quote unquote," said Catanzara. "It's obviously an agenda by the mayor, to try and stoke the fires of anti-police sentiment yet again. Pour a giant tanker load of gasoline on the fire, so she can try and get legislation done in Springfield to license officers, which is a backdoor attempt to be able to fire, our members."

The president of the Fraternal Order of Police offered a full-throated defense of the CPD officers caught on video lounging, sleeping and eating in Rep. Bobby Rush's office.

FOP leadership says it does not support the licensing of police.

"It's hard to know what she means by licensing, but the idea has to be it's something more than what we see now. So, maybe it means there's a battery of tests that these police have to go through that they don't now have to go through. Maybe it means psychological testing itself, which could make some sense. It presumably means something different from what we have now. We just don't know what," said ABC 7 legal analyst Gil Soffer.

Eight officers accused of wrongdoing, and a pledge from city hall to reform the police department. That was 1960 and CPD's infamous Summerdale scandal. Cops in that case were operating a burglary ring. In the 60 years since Summerdale there have been many other headline cases of misconduct and dereliction that were a blot on the thousands of good officers who make up CPD. Until tonight there has never been such an avalanche of action by the city in such a short time.
Report a correction or typo
Related topics:
chicagowashington parkfraternal order of policemisconducti teamchicago police department
Copyright © 2021 WLS-TV. All Rights Reserved.
I-TEAM
What are your holiday flight rights if plans change?
Chicago police to beef up staffing after weekend violence
North Shore brothers plead guilty Jan.6 US Capitol attack charges
ISP making progress on FOID card renewal backlog
TOP STORIES
Man shot, killed outside Chinatown neighborhood school: CPD
Defense rests after Jussie Smollett takes stand again
IL reports 7,068 new COVID cases, 78 deaths
Parents go on patrol to keep peace at west suburban high schools
Major outage hits Amazon Web Services; many sites affected
Nick Cannon mourns loss of his 5-month-old son Zen to brain tumor
New state program offers water/sewer billing relief
Show More
Reaction after money in walls of Lakewood Church, which Osteen heads
Police seek information on social media profile in Delphi murder case
OPRF resumes extracurricular activities Tuesday
Girl, 12, seriously hurt in Millennium Park shooting over weekend
Woodridge condo residents kicked out of homes for winter for repairs
More TOP STORIES News