Chicago protests: Protestors march on North Side for 2nd day in a row 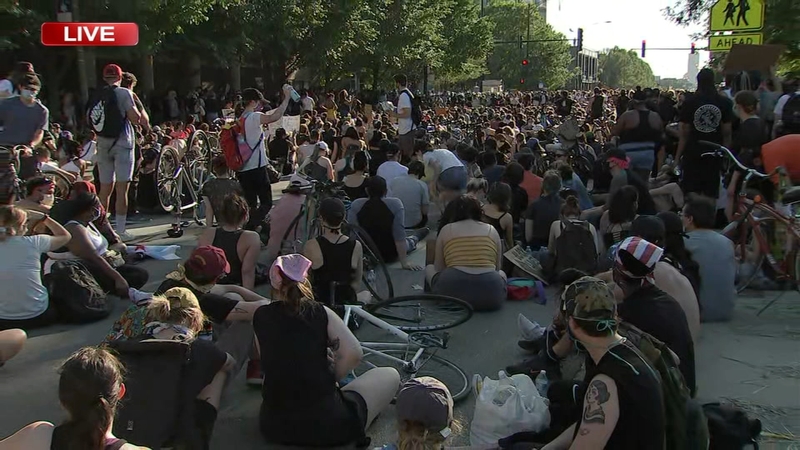 Chicago protestors sit down in middle of Division Street

CHICAGO (WLS) -- For the second day in a row, a large protest marched through Chicago's North Side neighborhoods Tuesday.

Protestors were heard chanting "Say his name!" and "This is what justice looks like!" Some also called for the release of demonstrators who were arrested in the last few days as chaos erupted across the city.

For the 2nd day in a row, a massive protest gathered on Chicago's North Side to demand justice for George Floyd.

As more people joined in along the route, the crowd continued to swell. Protestors then sat down in the middle of Division Street near Larrabee outside the Target store for over an hour before continuing to march through the city streets.

A fortified line of police officers stopped the crowd before they were able to reach the 18th District police station.

The peaceful gathering is believed to be heading back to Wrigley Field at some point, but continues to march through neighborhoods on the city's North Side, including Old Town.

As many as 5,000 people chanted George Floyd's name as they marched more than a mile from the Belmont CTA station in Lakeview to Uptown.

Thousands of protestors streamed onto Lake Shore Drive Monday evening after several hours of demonstrations across Chicago's North Side.

As many as 5,000 people chanted George Floyd's name as they called for justice, marching more than a mile from the Belmont CTA station in Lakeview to Uptown.

After sitting down in a demonstration outside the Target store on Broadway and Sunnyside, the group then headed toward the lakefront. With ramps already closed to traffic, the massive crowd marched onto Lake Shore Drive at Irving Park Road.

While hopeful the protest would not devolve into criminality, one woman said it remained to be seen.

"You can't hurt somebody and tell them how to heal. You can't," participant Stefanie Sefah said. "Once you hurt somebody, how they heal is up to them."

Diversity and solemnity characterized this crowd. It seemed different for those not easily impressed.

"I feel good about this turnout because that shows there's a lot of people that have the same feelings," one participant said.

A teacher in the crowd insisted that his presence as a white male was evidence the demand for change in policing and criminal justice in the wake of George Floyd's killing is widely held.

Another peaceful protest was held earlier Monday in the Lincoln Park neighborhood at Wrightwood and Lincoln. After marching, the group peacefully sat down in the intersection.

Chicago's police superintendent and the mayor responded Monday to the weekend violence and looting across the city sparked by the police-involved death of George Floyd.