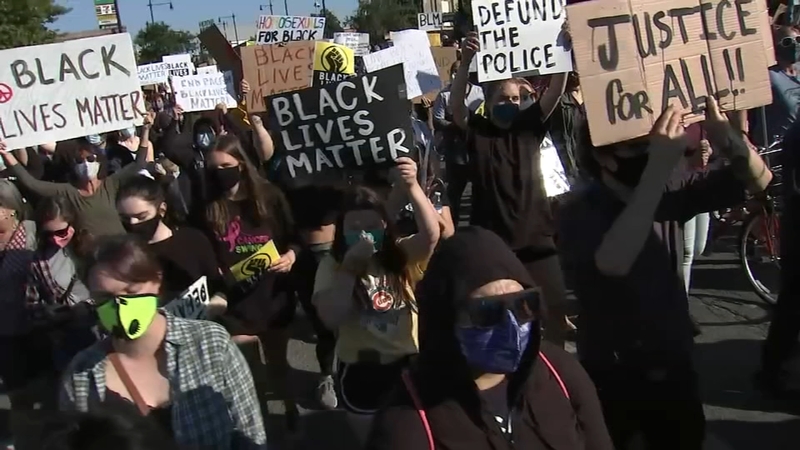 CHICAGO (WLS) -- Hundreds of protesters marched through the North and South sides Friday to demand civilian oversight of the Chicago Police Department.

Demonstrators are calling for the creation of a civilian police accountability council, and the momentum of the peaceful protest movement refuses to cede any ground.

"Things don't change unless people get involved and so I'm getting involved," said protester Colleen Riley.

Protesters lined the street and filled in the space outside a Portage Park alderman's office. The crowd took control of several city blocks, moving as a mass through the Northwest Side.

"This is a progressive revolution, I would say," said protesters Ashley Szumny.

On the move to the Chicago Police Department's 16th District in Jefferson Park Friday, the demonstrators' message didn't let up.

"I want to see an elected civilian group, especially people of color, elected by us, not the mayor, by the community," said protester Sean Heaney.

After protesters peacefully dispersed, a handful stuck around to speak to Ald. Jim Gardiner directly about civilian police oversight and Black Lives Matter.

"I support the right to protest and voice your concerns," Ald. Gardiner said.

But when pressed about whether he supports Black Lives Matter, Gardiner didn't comment.

Meanwhile on the South Side, the Chicago Alliance Against Racist and Political Repression, Black Lives Matter Chicago, Southsiders Organized for Unity and Liberation and other activist groups also marched for civilian control of the Chicago Police Department.

"In Chicago, we continue to live the nightmare of the CPD's heinous legacy of torture, which has seen hundreds of Black men and women wrongfully convicted - men and women who have been left to die in prison death traps as COVID-19 spreads," the groups said.

At the University of Chicago, protesters staged a campus sit-in Friday.

At the University of Chicago, protesters staged a campus sit-in Friday.

The students were in the lobby of the campus police station, calling for the university to disband the department.