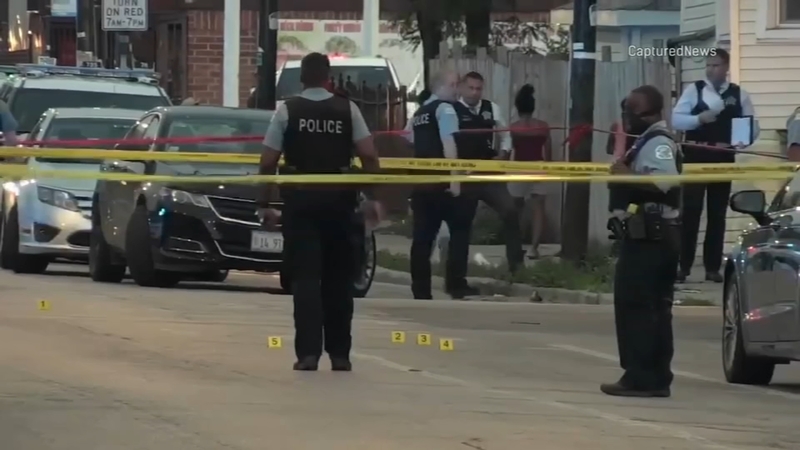 CHICAGO (WLS) -- Chicago police say a 3- year-old girl is in serious but stable condition after being shot Tuesday evening in West Englewood on the South Side.

The shooting happened at West 70th Street and South Damen Avenue a little before 8 p.m. Chicago police said it appeared that the shooters were in a vehicle and the victim was not.

Family members said the girl was outside, playing in the front yard with some other children when a family member heard what they thought was fireworks. Her mother ran outside and said she found her daughter lying face up with a bullet wound to her chest.

The girl was shot in the chest and taken to University of Chicago Comer Children's Hospital in critical condition. Once there, her condition was upgraded to serious but stable. She was in surgery Tuesday night and is now talking, Chicago police said.

A 3-year-old girl was seriously injured in a shooting in Englewood Tuesday evening, Chicago police said.

Hattie King was sitting outside at her home in the West Englewood neighborhood when gunfire broke out.

"We were sitting on the porch and then these cars started flying by and started shooting so we jumped up and ran in the house," King said. "I didn't know nobody got shot down the street though.

Police said canvassed the neighborhood, looking for evidence. They believe the shooters were in a vehicle but have not yet released any further details or descriptions.

"This is not and this cannot be our new normal," said CPD Chief of Operations Fred Waller. "These are our babies being shot. Randomly. Recklessly."

John Thompson lives next to Wednesday night's crime scene and has seen a shift in the shootings over the years in his area.

"It used to be worse... the shooting, but it wasn't kids that was being shot all the time," Thompson said.

An investigation is ongoing. No one is currently in custody.

A 15-year-old was shot only a few blocks away near 71st and Honore and police. Police said Wednesday that the two shootings are not related.

The shooting comes after back to back weekends of increased gun violence that has claimed the lives of several children in Chicago.

CPD is promising to add 1200 additional officers in hotspots across the city starting Thursday to control 4th of July violence.