2 killed in Park Manor mass shooting on South Side ID'd, 13 others wounded 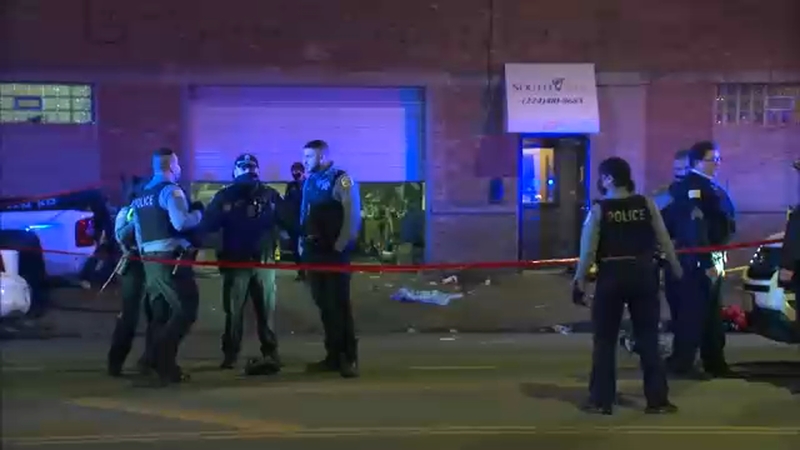 2 killed in South Side mass shooting ID'd, multiple others wounded

CHICAGO (WLS) -- A shooter opened fire at a party, killing two people and injuring 13 others early Sunday morning on the South Side, Chicago police said.

"One of the patrons began to shoot inside the building striking multiple people," Chicago police officials said in a statement.

The shooting happened about 4:40 a.m. in the 6700-block of South South Chicago Avenue, according to preliminary information from Chicago police. The location is a Park Manor tow company that appears to double as an event space.

The warehouse is usually used for auto repairs and towing but overnight it was packed with hundreds of people inside, according to witnesses.

"There's actually a bar set up inside. So at one point, it may have been an old lounge. That is, you know, obviously converted just for the pop-up party," said Chicago Police Superintendent David Brown.

During the party, at least one person opened fire.

A fight broke out between several people attending the party about 4:40 a.m. in the 6700 block of South South Chicago Avenue when gunfire erupted.

Emergency responders arrived on the scene just minutes after the first 911 call came in at 4:43am. They quickly called in additional resources as they realized the magnitude of what had just happened.

"They were running. They were screaming...it was quite chaotic,' said Deputy Chief Greg Stinnett with the Chicago Fire Depratment. "Our crews did a tremendous job getting their arms around it. Sorting out the casualties, and the victims. And we were able to triage, treat and transport everyone effectively."

A disagreement between some of the partygoers seemed to have led to the shooting, but police said it's too early to determine what led to the violence.

"We heard that rumor of someone who was at the party left and came back. But we're just unable to confirm that rumor at this point. It's still so early, particularly with some of the witnesses in surgery right now that we haven't been able to talk to," Brown said.

The victims ages range from 20 to 44 years old.

Those wounded were taken to area hospitals, some in critical condition.

The two victims killed have been identified as Rayneesha Dotson, 30, and Lionel D. Darling, 39, both from Chicago, according to the Cook County Medical Examiner's Office. 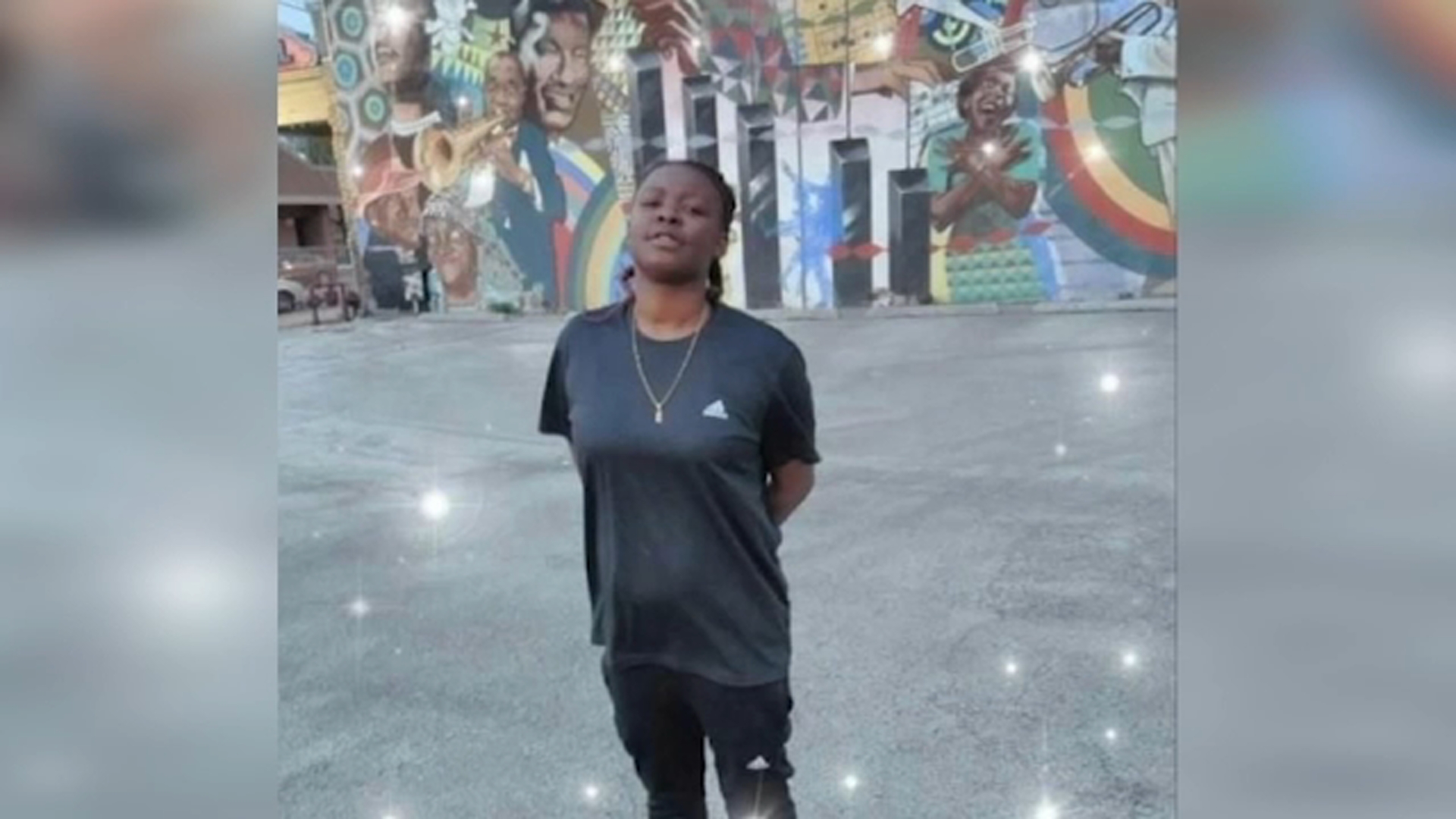 Rayneesha Dotson, 30, has been identified as one of two people killed at a South Side party. Several others were wounded, according to police.

Dotson was in Chicago for a weeklong visit from Texas, where she recently moved to escape the gun violence around her.

The prayers of all Chicagoans are with the families of the two people killed this morning and the many others wounded following the outrageous shooting attack that occurred in Park Manor.

This as police said they are doing a "deep dive" into the property owner's history, for hosting a party of this size under current circumstances.

No one is in custody and Area One detectives are investigating.

A photo of the scene shared by the fire department showed balloons and a shoe strewn outside the South Side Think Tank, at 6798 S. South Chicago Ave.

EMPS Plan 3 has been secured (multiple gunshot victims transported to area hospitals; 2 deceased). No further information at this point 4-1-10. pic.twitter.com/QjovYF13Tw

Officers placed at least 10 evidence markers outside the building, but most investigators appeared to examining the inside of the business. There appeared to be a pool of blood on the sidewalk near the door of the building.

A Chicago police spokesman was unable to immediately provide details about the shooting.

The shooting was one of the most violent, in terms of number of people hurt, in recent Chicago memory. Last July, 15 people were shot outside a Gresham funeral home, but none of the victims died.

In 2013, a mass shooting wounded 13 people, including a 3-year-old boy, in Cornell Park near 51st and Wood in Back of the Yards.

Last December, six people were hurt after gunfire broke out at an overnight party in a South Side salon in the Burnside neighborhood.

So far this year, officers have responded to 393 shooting incidents across the city through March 7, according to police statistics. That's a 31% increase over the same period last year, which saw 301 shooting incidents.

At least fifteen other people have been wounded in shootings across Chicago so far this weekend, including a teen who was shot in a drive-by Saturday in West Pullman on the far South Side.

Five people are dead and at least 33 others hurt in shootings across Chicago since Friday evening.

Two people were shot, including a 13-year-old boy, Sunday in South Shore.

The teen was shot in the knee and taken to Comer Children's Hospital in good condition, police said.

The man was struck in the arm and taken to the University of Chicago Medical Center, police said. His condition was not immediately known.

About 4:30 p.m. the 17-year-old boy was in the backyard of a residence in the 12200-block of South Bishop Street when someone in a dark-colored sedan pulled up and fired shots at him, Chicago police said.

He was struck in the right thigh and brought to Christ Medical Center in Oak Lawn for treatment, police said.

Earlier in the morning just before 11 a.m., police said a man was shot in the foot by a man in near the CTA Red Line Station in the Park Manor neighborhood.

The 32-year-old was approached in the 6900-block of South State Street by someone who pulled out a gun and opened fire, Chicago police said.

The victim was taken to University of Chicago Medical Center in good condition, police said.

Detectives are questioning a person of interest, police said.

Hours earlier, a 27-year-old man was seriously injured in a shooting in Gresham on the South Side.

The man was sitting in his vehicle about 4:40 a.m. in a garage in the 8100-block of South Green Street when someone shot him in the abdomen, police said. He did not see the shooter and was unable to provide any additional details on the incident, police said.

He was taken to the University of Chicago Medical Center where he was listed in serious condition, police said.

A 30-year-old man was shot early Saturday in South Shore.

The man was walking about 1:35 a.m. in the 7900 block of South Coles Avenue when he heard shots and felt pain, police said. He suffered a gunshot wound to the leg and a friend drove him to the University of Chicago Medical Center where he was listed in good condition, police said. The man did not see the shooter or where the shots came from, according to police.

A 33-year-old man was wounded in a shooting Friday night in Portage Park on the Northwest Side.

The man was walking about 11:05 p.m. in the 6000-block of West Addison Street when he heard shots and felt pain, police said. He suffered a graze wound to the head and walked to Community First Hospital where he was listed in good condition, police said.

In the weekend's first reported shooting, a man was wounded in a shooting in Little Village on the Southwest Side Friday night.

The man, 21, was driving about 9 p.m. when someone in a passing white sedan fired shots at him in the 3600-block of West 26th Street, police said. He was struck three times in the shoulder and drove himself to Mt. Sinai Hospital, where he was in fair condition, police said.