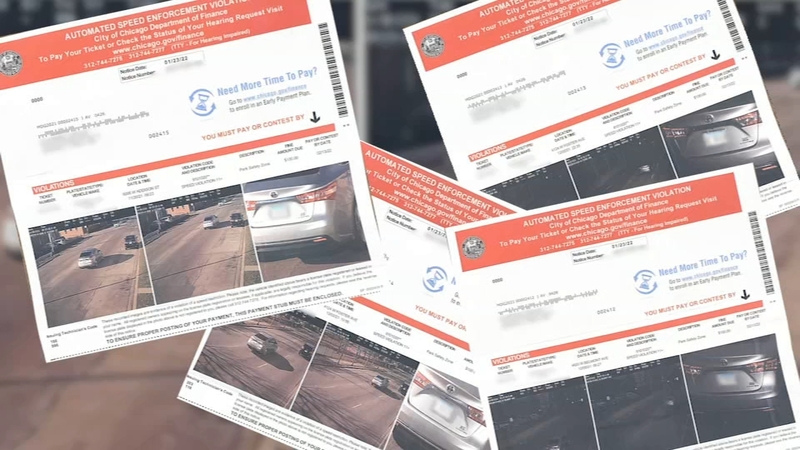 CHICAGO (WLS) -- The I-Team has heard from more people who said they are stuck paying the fines for on-camera tickets racked up by thieves who took their vehicles.

In March, the I-Team investigated one man who was denied an appeal by the city despite his car being stolen. Now they have heard from more people in the same situation, and found the city of Chicago is denying more appeals on red light and speed camera tickets, even after drivers show proof that their license plates or cars were stolen.

"I was a victim when the car got stolen and I'm being victimized again," said Lockport resident Bob Virene.

"He's a victim and he's now victimized by the city," Karen Canada of Chicago said of her son.

All three of these people were first victimized when their cars or license plates were stolen. Then the thieves racked up speeding and red light camera tickets.

After contesting the tickets with the City of Chicago, and showing evidence of the thefts, the city told all three to pay up.

"I noticed in the photo that it wasn't my car," Geary said. Her plates were stolen, then she received speed camera tickets. The citations connected to her stolen plate on a different car.

She said Chicago police told her, "'No big deal, just send in your police report and the ticket. This will be dismissed.'"

But it wasn't. The city added fines when she didn't pay and Geary now owes $800 for the speed camera tickets alone.

Karen Canada was the one who noticed someone had stolen her son's license plate.

"It's sad, he has to pay the price for somebody else's actions," she said. "Then started getting all of these notices in the mail of red light tickets. Seven in Chicago."

After supplying a police report and not being granted an appeal, they paid some of the tickets because her son was applying for a job with the city.

"I knew he couldn't be in debt to the city so I paid three of them. I tried writing letters, calling the 744 number and nobody ever responded," she said.

Virene's car was stolen from inside his Lockport garage. He then got a ticket for a red light camera 35 miles from his home in the city of Chicago. He contested with a letter from a Lockport police officer verifying the theft, but Virene lost.

"The administrative judge denied the claim. It wasn't sufficient evidence. What other options do I have?" he wondered.

So Virene paid the $100 ticket because he didn't want to get booted at the airport.

All three called the I-Team after seeing Kerry Levin's story in March. His car was stolen from the White Sox parking lot. The city said he had to pay a red light camera ticket despite an appeal with proof that his car was stolen. The city dismissed Levin's ticket after the I-Team asked about it.

The city's Finance Department would not talk to the I-Team on camera about the latest complaints but said after reviewing Virene's information and finding an error, they have refunded him.

The Finance Department went on to say the other two drivers should be forgiven, but they have to re-submit their documents to the Department of Administrative Hearings because they both contested their tickets after the required 21 day deadline.

All the people who contacted the I-Team say there should not be that deadline in these types of cases.

The city also added that people need to "be sure to provide a copy of the official police report and not the summary report or just police report number."

The people who contacted the I-Team believe any documentation of theft should be enough, and Canada's son did supply the full, official police report.

"It's very upsetting for me, I'm trying to raise my son to be a responsible man and he didn't run these run red lights," said Canada.

To get a full police report is a process. You either have to go to police headquarters in person at 35th and Michigan or wait for it to arrive in the mail.

As for those in our story who already paid tickets, the city said they must now request a refund online.

MORE TIPS FOR MOTORISTS FROM THE CHICAGO DEPARTMENT OF FINANCE

Motorists should request a hearing when they get a ticket they want to contest. They have 21 days from the notice date. They should also call 312-744-PARK if they have any questions about tickets issued when their vehicle or plate was stolen. Be sure to provide a copy of the official police report (not the summary report or just police report #). Also provide a recovery report (when the vehicle or plate was recovered). If there is no vehicle recovery, please provide a copy of the insurance total-loss letter. If the license plate is not recovered, contact Illinois Secretary of State and provide proof that the plate was revoked and/or replaced.

Chicago police: How to get a full police report

Can you get a refund for the paid tickets? If so, how?
If DOF determined that tickets were issued when the vehicle or plate was stolen, then tickets will be withdrawn. If the tickets were paid, motorists can then submit a refund request form, which can be found on the DOF website: https://pay.chicago.gov/workflows/tickets
Report a correction or typo
Related topics:
personal financechicagolockportticketstraffic camerascar thefti teamspeedingchicago police departmentred light cameras
Copyright © 2022 WLS-TV. All Rights Reserved.
I-TEAM
More collar counties charging dealers for drug overdose deaths
I-Team: Rogue Towers
Wedding guest budgeting tips
Postal police say they are sidelined during time of heightened crime
TOP STORIES
Death toll rises to 21, mostly children, in TX school shooting
Uvalde school shooting: What we know about 19 kids, teacher killed
Republican candidates for Illinois governor face off in 2 forums
Father of Texas yoga instructor accused in cyclist's murder speaks out
Chicago expected to move to 'high' COVID level by Friday, Arwady says
Gary teen killed in shooting identified by family
Chicago Weather: Showers and storms Wednesday
Show More
Woman shot near CTA Red Line stop on South Side
Biden says 'we have to act' after Texas school shooting
1 killed in 10-vehicle crash on I-294 in Glenview
Long COVID symptoms mainly affect women in their 40s, study finds
Watch Steve Kerr's raw, emotional plea after Texas shooting
More TOP STORIES News