How to spot an unlicensed Chicago towing company and protect your car, plus save hundreds of dollars 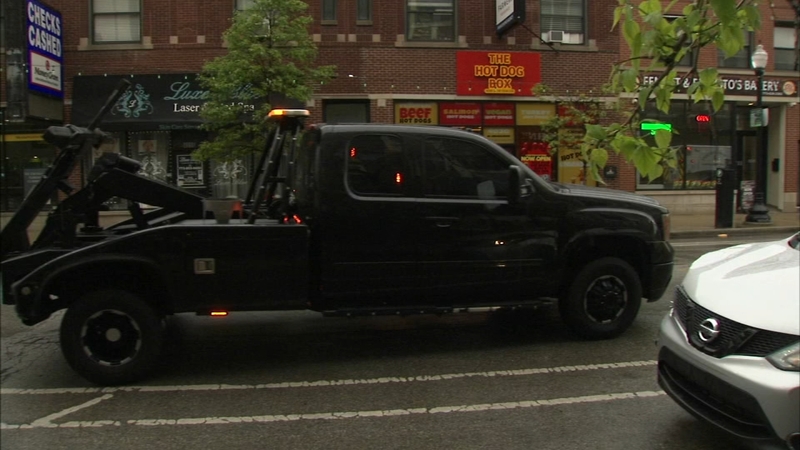 How to recognize an unlicensed Chicago tow truck service

CHICAGO (WLS) -- The state of Illinois received more than 850 towing complaints in the last year and a half, and now the city of Chicago is also starting to regulate towing companies. Here's how investigators say they are cracking down on rogue towers.

On a recent weekday morning in the Portage Park neighborhood, city investigators searched for tow trucks showing up at crash scenes.

The ABC 7 I-Team went along as the city's Business Affairs and Consumer Protection Department (BACP) and Chicago police found violators.

Two trucks fled the scene and could face violations of $10,000 each for driving away before investigators could talk to them. Two more tow trucks stuck around, and got citations.

Those rules are part of a new city ordinance. The city now requires tow truck owners to have a city license, which means owners must provide finger prints, pay a $250 registration fee per truck, and $250 company fee every two years. Licensed trucks get a green sticker to display on the windshield. BACP Commissioner Ken Meyer wants consumers to look for that sticker before hiring a truck.

The tow truck company the cited drivers work for, Cook County Towing, faces 13 citations for not having and displaying the proper license, illegal scanners and lights, and one citation for operating a company listed as being dissolved in 2020. Cook County Towing hung up when the I-Team called for a comment.

"Okay, so the car was parked right here in front of our store," Linda Mrkvicka said.

Mrkvicka said she had a problem with a towing company she said showed up after her vehicle was hit in front of her fabric weaving business in Albany Park.

Mrkvicka said that verbal estimate by 1st Response Recovery and Towing Company, based out of Chicago, changed and increased to $2,400 cash when she wanted to pick up her car.

"They held it hostage for four days 'til my insurance company talked him down to $1,400 and then they finally took it over there," she said.

Bryce Saylor had a similar experience with a different company.

Saylor said he called Priority Wrecker Service to tow his truck from the West Loop to southwest Michigan. Saylor said he didn't get a written quote, but after loading his truck on the trailer, the company wanted him to pay $5,000. He didn't have the money and he said they would only let his truck off the tow for $2,700. He said he paid it and hired another company.

Priority Wrecker Service told the I-Team they wanted to discuss the situation, but then never got back to us. The I-Team also never heard back from 1st Response Recovery and Towing Company. Both companies have a record of several violations with the state.

Saylor didn't know about BACP, but reported his incident to the state. BACP said Priority Wrecker Service does not have a city of Chicago business license and could only take further action if they receive complaints and violations are issued.

Mrkvicka filed a complaint with the state and BACP about 1st Response Recovery and Towing Company. The city issued that company a cease and desist order to not operate, since the city says it does not have a proper city business license and because it has five complaints on file in 2021 and 2022.

"Do not ever give up your vehicle. If a tow truck pulls up, and sometimes they'll be very bold and say well, the police department called us or your insurance company called us," Meyer said.

Meyer said you should call your own tow truck through your insurance provider and make sure you get an iron clad estimate so the price can't be changed on you.

"Switching the price is absolutely illegal. That's why it's very important that the consumer gets everything in writing," he said.

"They get a chain on 'em and they won't let 'em go until you give them what they want, it's not fair," said Saylor.

Experts say you should take pictures of your vehicle before it gets towed to make sure the tow company doesn't damage it further. Ask about daily storage fees before your car is taken away.

The state of Illinois also regulates tow trucks, so look for the Illinois Commerce Commission's license number on a tow trucks as well.

More from the Illinois Commerce Commission

State records from the Illinois Commerce Commission, which has always regulated tow companies, show that Priority Wrecker has been issued 26 Citations from September 13, 2021 and April 15, 2022.