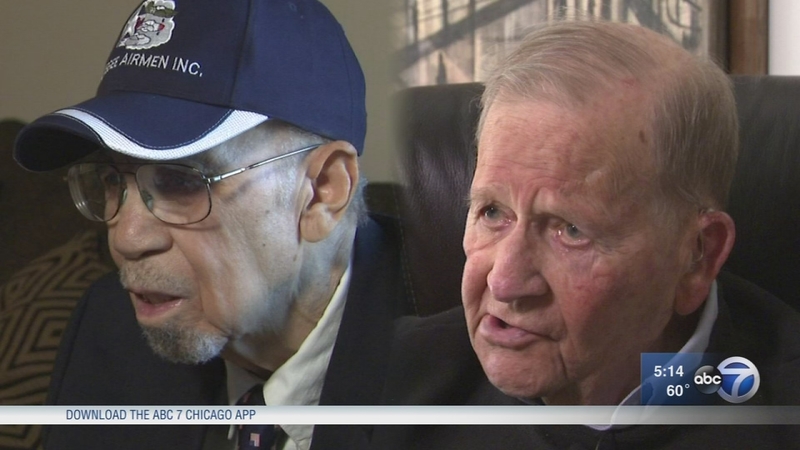 CHICAGO (WLS) -- On the eve of Veterans Day, 10 veterans from World War II to Afghanistan will receive a special recognition Thursday night.

Two of the veterans are from Chicago, though they had very different experiences serving in World War II.

"There are Germans in front of us, there are Germans behind us, to the right of us and the left of us, and they are an uncoordinated as we are, but we have a mission," said George Klein, Army Ranger.

The D-Day mission was to climb the cliff and take out the German guns at Pointe du Hoc, on the French coast between Omaha and Utah beaches. Platoon leader George Klein and his fellow Army Rangers took the hill and for two days held a nearby supply road choking off German reinforcements. Casualties cut the platoon in half.

"The assumption was at headquarters that we had been wiped out because there was no communication. The radios didn't work," he said.

In close-quarter fighting, George took a bayonet to the leg. He patched himself up and kept going until he could go no more. An explosion later nearly killed him, but he survived. His Purple Hearts, Bronze Star and other medals speak to courage under fire. He was on a ship coming home when the end of the war was announced.

"I was there. Ready, willing and able, and didn't get the chance to show whether I could or couldn't," said Julian Johnson, a Tuskegee Airman.

Julian Johnson had a far different wartime experience. The Army trained him as a bombardier, a navigator, and a pilot. His skills were fine, but he was never called to use them in combat. It didn't sit well that Johnson and other African American officers had objected to a segregated officers club and swimming pool.

"You have one little path because of the color of your skin. There's no other place for you," Johnson said.

It was an experience in frustration, but Johnson proudly wears his Tuskegee Airmen cap.

Two men of different color and different experience shared this: that the real salutes belong to those who didn't make it home.

"And I'm here and they're gone. I guess that in a sense bothers me more than anything else," Johnson said.

"When I go to these things. People say you're a hero. I say that's a bunch of bull [expletive]. The heroes are the ones still over there," Klein said.

Long after war's end, Klein was introduced to the term "survivor's guilt." he acknowledges there's something to that.

Johnson bears a different kind of wound - one that he says left him disappointed, though not angry.

Julian is almost 92. George is 95. Both went on to live good lives after their wartime experience. And whether or not they are comfortable with it, the salutes will be for them.
Related topics:
societychicagoveterans dayveteransworld war ii
Copyright © 2022 WLS-TV. All Rights Reserved.
TOP STORIES
Security guard hurt after confrontation at suburban Walmart: police
Some peanut butter recalled for potential salmonella
Security guard shoots man in buttocks at Millennium Park
'Absolutely terrified' teen boy dies hours after 'sextortion' scam
Wedding guest budgeting tips
Chicago mass shooting victim ID'd as father of 2, with twins on way
Chicago police warn of robberies on Near North Side
Show More
At least 1 dead, 44 injured after tornado strikes northern Michigan
Weather for Preakness could be hottest in history of race
First formula flights from Europe to arrive this weekend
3 wounded in separate shootings on South Side, Chicago police say
Dog battles mountain lion to save owner's life
More TOP STORIES News