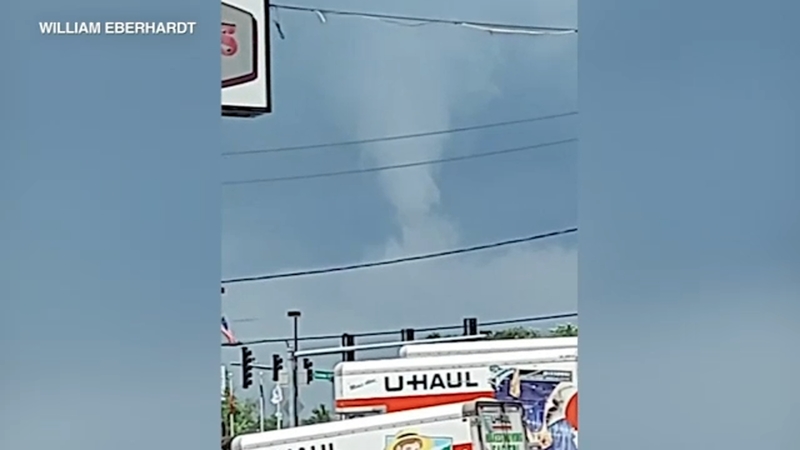 Many people who were out to enjoy the day quickly ran to take cover when tornado sirens sounded off in many of the Chicago neighborhoods.

ABC7 Meteorologist Cheryl Scott said there was no indication of any tornado touchdowns in the city.

Sara Smith was caught in the middle of the storms while on her way downtown to the Pride in the Park festival.

"People all acted normal. I was the only one that was panicking. Should we get off? Should we not? The wind is whipping, but here we are rain or shine ready to dance," said Kelsey Brooks during her visit to Chicago.

The festival was postponed due to severe weather with the crowd on alert.

"The wind was whipping and the rain was coming down, and then 30 phones went off. The tornado warning said to take cover," said one festival goer.

Many people who were out to enjoy the day quickly ran to take cover when tornado sirens sounded off in many of the Chicago neighborhoods.

The heavy rain led to flash flooding downtown, making roads like Lake Shore Drive impassable with standing water. A viaduct at Irving Park and Lake Shore Drive is now closed off to traffic due to dangerous conditions.

"Everyone was running in the streets and the wind and the rain was bad. [It was] spiraling on the ground. It was really scary," said another person.

On the South Side near 84th Street and Perry Avenue, crews worked to remove a large tree that fell during the storm. Branches even crushed one car.

Meteorologist Larry Mowry said the storm was moving at about 30 mph, but as of 7:30 p.m., the severe line has completely moved out of the Chicago area and is east of South Bend, Meteorologist Phil Schwarz added.

Tornado sirens also went off twice in south suburban Crete Saturday afternoon. The first time was around 2 p.m. when a tornado was spotted going through town. Cell phone video captured by Crete Firefighter William Eberhardt showed a well-formed funnel cloud, although no touchdown was confirmed.

Viewer captures video of a funnel cloud in Crete, Illinois Saturday as multiple Tornado Warnings were issued in the Chicago area.

"I looked at it at first and it was just rotating slowly and it was gradually getting bigger, and it looked like it was going to touch down there for a second," Eberhardt said. "Then it went right back up to the clouds and just dissipated."

Schwarz and fellow Meteorologist Greg Dutra analyzed radar that showed velocity and rotation data that indicated a possible tornado near Crete just after 2 p.m. Saturday. The system then appeared to move near Dyer.

At 2:08 p.m., the National Weather Service said a confirmed tornado was over Crete and Steger and moved northeast at 30 mph. The storm prompted a tornado warning, but it was canceled at 2:33 p.m

Tornado on the ground near Crete 206pm. #ilwx @NWSChicago pic.twitter.com/wrurf51mdk

It was moments after speaking to Eberhardt, at around 4:15 p.m. that the sirens went off again when a second funnel cloud sighting sent our ABC7 crew into the fire department's emergency shelter until the danger passed.

A funnel cloud sighting sent our ABC7 crew into a Crete Fire Department emergency shelter until the danger passed.

Despite multiple alerts, the violent storms left behind mostly tree damage, and at least one injury was reported in nearby Steger, where a woman was hit by a falling tree.

"We heard a big snap and we looked over and a huge 60-foot tree is falling and the neighbor's wife was underneath it," said witness Marc Opyt. "We ran over [and]we called 911 and we pulled the branches off her. [We ] held the branches back so they wouldn't push up against her until they took her out."

The woman was taken to the hospital with a possible broken leg.

Similar activity was seen in northern portions of Newton and Jasper counties, as well as Lake and Porter counties. There are also unconfirmed reports of a tornado or microburst in the Hoosier State, but no reports of injuries there so far.

Water was seen shooting out from a Chicago manhole as heavy rain and flash flooding impacted area Saturday.

A funnel cloud was reported by emergency management officials near Earl Park in Benton County, Indiana around 6:15 p.m., according to the NWS.

"Storm just blew through out of nowhere, came through and knocked over all our trees," said Nancy Phillips, a Dyer, Indiana resident.

"All of a sudden I heard a train, and you always hear it sounds like a train, so I knew. But it was very, very quick. We were lucky no one in the neighborhood was hurt,"added fellow resident Jill Brouillette.

Funnel clouds were seen between University Park and Crete, as well as near Goodenow.

A funnel cloud was also spotted near W Goodenow Rd, north of Beecher in Will County (IL) at 4:32 p.m., according to the National Weather Service.

The National Weather Service has confirmed two tornados touched down in north-central Indiana.

According to WTHR-TV, the first tornado was reported around 8:18 p.m. Friday night in far eastern Tippecanoe County at winds of 95 mph. At around 8:30 p.m.

Friday, reports were made of a second tornado in Carroll County. Reports of damage in Carroll County included mainly tree damage and some minor shingle or siding damage to homes, but there were no reports of any injuries.

A Flash Flood Warning was in effect for several counties after storms dumped over 3 inches of rain in a short period of time across the Chicago area Saturday.

There is a Flood Advisory in effect DuPage River near Plainfield until 7 a.m. and Kankakee River at Dunns Bridge until 7 p.m. Sunday.

There is also a Flood Warning for Little Calumet River in Munster (IN) until 6 p.m. Sunday and Vermilion River at Pontiac (IL) until 4 p.m. Tuesday.

All lanes of the Eisenhower Expressway were closed in both directions for a few hours due to water on the roadway, according to the Illinois Department of Transportation, but as of 6:25 p.m., all lanes (east and westbound) were re-opened.

All lanes (eastbound and westbound) were re-opened at 6:25pm. https://t.co/RRZ0w68mOM

Widespread flooding has been reported across the city. Videos showed cars driving slowly through high water on Lake Shore Drive and Belmont Avenue on the city's North Side.

Heavy rain #Hinsdale #Illinois my thanks to Claudia for sharing this with me. #flooding rains pic.twitter.com/mmxSdrgOMx

Heavy rain also led to flooded streets in the western suburbs, including Naperville, Cicero and Berwyn. Mannheim Road has been closed between St Charles Road and Randolph due to flooding, the Bellwood Police Department said.

Route 116 near Saunemin Township, and East 900 Road between Forrest and Chatsworth in Livingston County are also closed due to flooding, according to emergency management.

As of 9:36 p.m. Saturday, ComEd reported about 95 active outages, meaning roughly 1,972 customers are without power in the Chicago area.

Saturday's storm also impacted those still trying to clean up from last Sunday's tornado in Woodridge and Naperville.

Portions of DuPage County also saw between 2.2 and 4.6 inches of rainfall from Thursday to Saturday morning, according to officials. Intense rainfall Saturday morning triggered the operation of four of the five of the County's major flood control facilities.

DuPage County Stormwater Management staff said they will continue to operate the flood control facilities and monitor stream elevations throughout the weekend as an additional 0.75 to 1.25 inches of rainfall is forecasted through Sunday.

Crews have already made several rescues from cars stalled in the water, according to fire officials.

If the water level touches the wheel rim of the vehicle, officials have advised drivers not to enter. Even if the vehicle is able to pass through the flooded area, the brakes may be compromised by the water, fire officials said.

Fire officials also warned drivers that vehicles abandoned in the water could suffer even more damage. 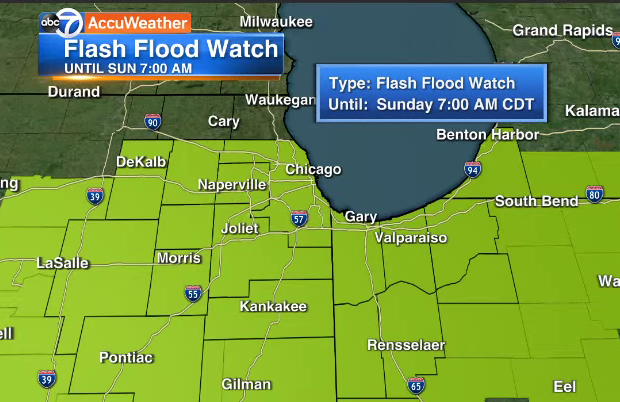 A Flash Flood Watch remains in effect for nearly all of the Chicago area through Sunday morning after a wave of thunderstorms rolled through the Chicago area during the morning rush Friday, tying up traffic with standing water and spin-outs.

Heavy water was reported on the westbound lanes of Interstate 80 and Interstate 94 near Cline and Kennedy Avenues Friday after a night of storms.

High water was reported in the westbound lanes of interstates 80 and 94 near Cline and Kennedy, on the Stevenson Expressway near Pulaski, Interstate 355 near the Stevenson, the Ida B. Wells Drive under the Old Post Office and the Hubbard Street tunnel.

"Roads are slick," Illinois State Police spokeswoman Delila Garcia said Friday morning. "Be careful to not brake suddenly, as this may cause hydroplaning and loss of control."

The National Weather Service issued the flood watch after about an inch and a half of rain fell overnight Thursday at O'Hare International Airport. Showers are expected to continue for the next few days, with another round of thunderstorms possible Sunday morning.

Semi Jackknifed on I-294

Park of the Kennedy Expressway was closed down Friday morning after a semi-truck jackknifed on the southbound lanes.

The semi apparently lost control and struck a wall just after 5:30 a.m., according to Illinois State Police.

Flooding was reported on the expressways after heavy rain fell Thursday night throughout the Chicago area.

The right lane of I-294, just south of I-290, was partially blocked for a short period but all lanes have since been reopened, ISP said.

Officials said the crash was weather-related.