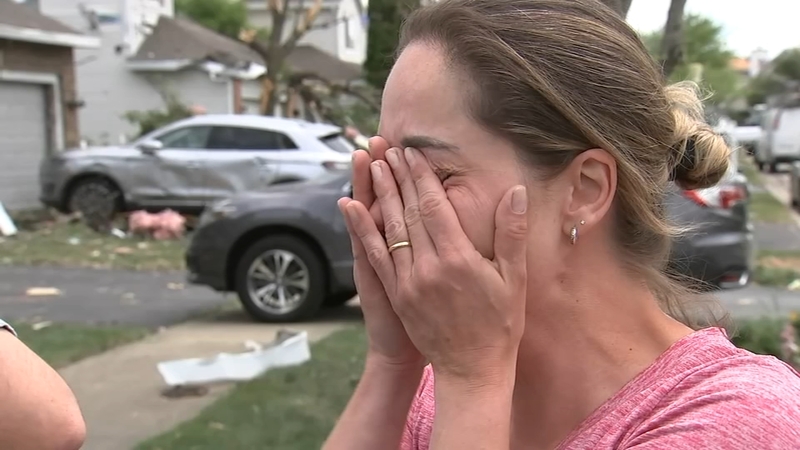 "My granddaughter was sleeping upstairs and she was going to run to the basement, and she took a second to grab her dog, and that's when the doors blew off," said Chris Schulz, tornado survivor.

Schulz, a longtime Naperville resident, said she, her husband and a granddaughter had a two-minute warning before the tornado hit their home, ripping doors out of the walls and toppling more than a half-dozen trees outside the home. The storm caused a wood shard into her lip. They lived at the home for 35 years.

"Next time the alert goes off, I will go to the basement," Schulz said.

For Father's Day, Mike Utter was visiting his parents in the home where they raised. He had to get his young daughter right before the tornado hit the home.

RELATED: Tornado touches down in DuPage County, with damage reported in Woodridge, Naperville

"We ran upstairs, grabbed the kids, as soon as I got upstairs, my ears popped from the pressure, grabbed both kids, hit the first floor, heard the freight train and next foot was in the basement," Utter said.

Father's Day did not go as planned for many others as well.

"My son came over with his fiancé and their two puppies, and we sat outside and had a nice meal earlier today, so the tree we sat under is gone," said Linda Kiepke, tornado survivor.

Cars on the block were also damaged as they were picked up by the fast-moving tornado and dropped.

Police blocked off residential roads to prevent gawkers and others out as crews and residents cleanup the area as well as search for missing items.

"Their kitchen is now in my pool, their bedroom strewn all over, their bathroom is somewhere over there," Naperville resident Katie Long Piper said.

The damage in her Naperville subdivision goes on for blocks. Along Spice Circle, one house after the other has been deemed uninhabitable, including the Saeze's house.

"I don't care about my stuff," Leandro Saeze said. "It's a miracle my son is alive and ok."

Saeze's wife had seconds to rescue their 9-year-old son from his bedroom before a piece of wood came through the roof, puncturing the boy's bed and pillow.

"We were delayed like 5 seconds, he would not be alive today," Fermanda Saeze said.

While sirens did go off, other residents say the tornado came so fast, they made it to their basements after the twister already hit.

"Within 30 seconds, glass was flying, our armoire was flying in the room," Naperville resident Alda Dougherty said.

As residents digest the incredible damage that was done here, many are still in disbelief that a tornado touched down in Naperville.

"When you think of a tornado hitting Naperville, you can't imagine it," Naperville resident Rayyan Hyder said.