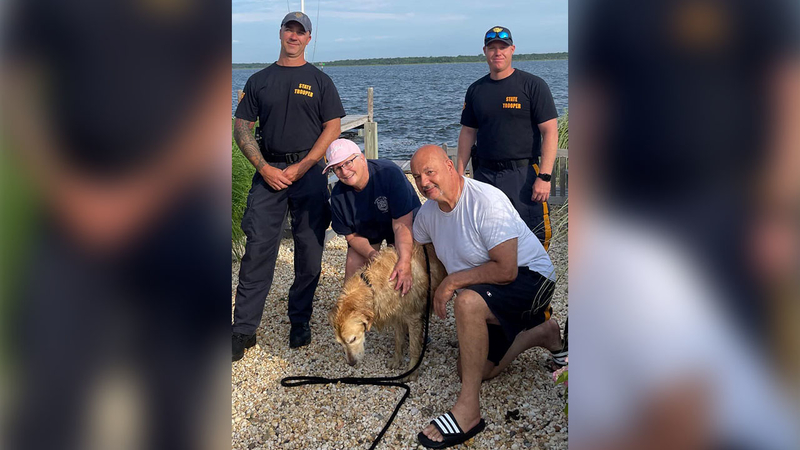 Dog rescued from Barnegat Bay after missing for 16 days

BARNEGAT, New Jersey -- A beloved dog that had been missing for more than two weeks is back with his ecstatic owners Tuesday, after being plucked from Barnegat Bay by New Jersey State Police.

Authorities say Troopers Ryan Koehler and Vincent Ferdinandi, of Point Pleasant Station, were preparing for their shift when they were dispatched to the report of a dog swimming in the bay.

They responded in a vessel and located the golden retriever in the area of the Mantoloking Bridge.

They were able to bring him safely to shore. He was identified as Chunk, a 3-year-old pooch that had been reported missing out of Brick since June 6.

"Your mind starts to think, 'Did he get hit by a car, in the woods dying?'" owner Marie Zangara said.

Two joggers who recognized Chunk from posters around town saw him jump into the water around 7 a.m. Jim Mathis was nearby fishing in his boat.

"They started waving at me," Mathis said. "I came close to him, and he kept trying to back away from the boat. Once I backed off, he started to swim toward land."

But not before Mathis had a chance to grab Chunk's collar and notify the owners. Meanwhile, the troopers hoisted Chunk to safety.

"We positioned our boat, got (the) line ready, acted as a leash," Koehler said. "Line around dog and guide him up to the docks."

The pup was healthy, if not a little ragged.

The CDC is conducting a multi-state investigation after a dog brought to the United States from overseas contracted rabies.

"He had some mats in his fur," Zangara said. "He's covered in ticks."

The family had been desperately searching for him.

"He ran into the woods with his toy," Jim Zangara said. "I said, 'Come on, buddy'...He turned around and booked. I think he might've been startled by somebody."

The Zangaras worked with an animal rescue service to set up traps, which didn't work, but they never gave up hope.

"I don't have the words to say-- thanks for all the support," Marie Zangara said.