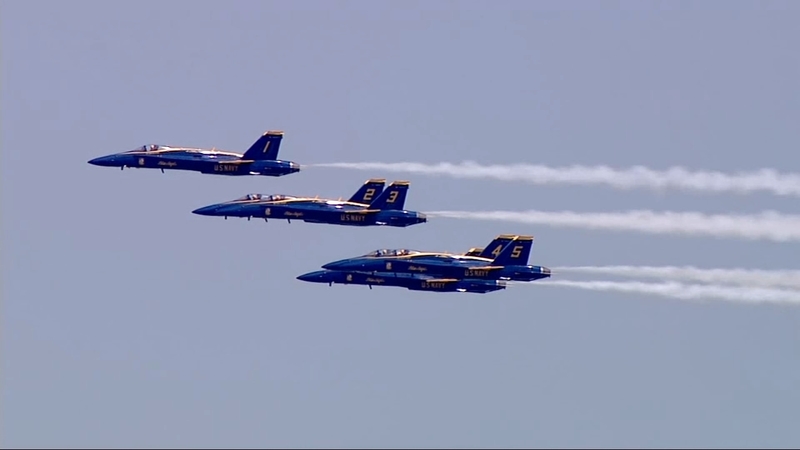 CHICAGO (WLS) -- The U.S. Navy Blue Angels saluted first responders and other essential workers as they flew over Chicago Tuesday.

The U.S. Navy Blue Angels flew over the Chicago area Tuesday to thank healthcare workers on the front lines fighting the COVID-19 pandemic.

The world-renowned Navy pilots have been paying tribute with a series of flyovers in major American cities.

The flights are funded by existing operations costs as part of the groups community outreach programs.

The 15-minute flyover began at 11:45 a.m. as the Blue Angels flew west from the lakefront over Chicago's South Side, then southwest over Oak Lawn before turning northward and flying back over the city's Southwest Side, including Gage Park and Back of the Yards.

The flight path then took them from the South Loop to the Northwest Side by 11:51 a.m., turning south near Norridge and flying over the near western suburbs of Franklin Park, Northlake and Melrose Park.

The Blue Angels then headed east over Oak Park and the city's Southwest Side before heading north along the Kennedy Expressway. Cutting across Chicago's North Side, the pilots made a loop over Lake Michigan near the Evanston border, then flew south along Chicago's entire lakefront around noon.

Your #BlueAngels are heading your way #Detroit, #Chicago and #Indianapolis!

Check out the overhead times and route on the graphic below.

Note: a previous post listed overhead times for Indy in CDT, the update below is in EDT#AmericaStrong#InThisTogether#HealthCareHeroes pic.twitter.com/iBCTYkstcp

The U.S. Navy Blue Angels fly over Chicago as part of a salute to health care workers fighting the COVID-19 pandemic.

The lakefront remains closed, so people were being asked to watch the flyover from the safety of their own home. Officials discouraged people from traveling to see the flyover.

"I think it's awesome," said Annmarie McDonagh, director of emergency services at Cook County Hospital. "Our fire department has come out to salute our nurses, our police coming tomorrow for all of our hospital staff and then the Blue Angels, that is just super cool that they are flying over our hospital and Chicago and just saluting all of us. When I think of the Blue Angels, I think about their bravery and courage. And I think they are acknowledging our bravery and courage as well."

The Blue Angels also flew over Detroit Tuesday and headed to Indianapolis after Chicago.

Check out ABC7 flying with the performers at the Chicago Air and Water Show through the years.

The Blue Angels are a U.S. Navy Flight Demonstration Squadron based out of NAS Pensacola.