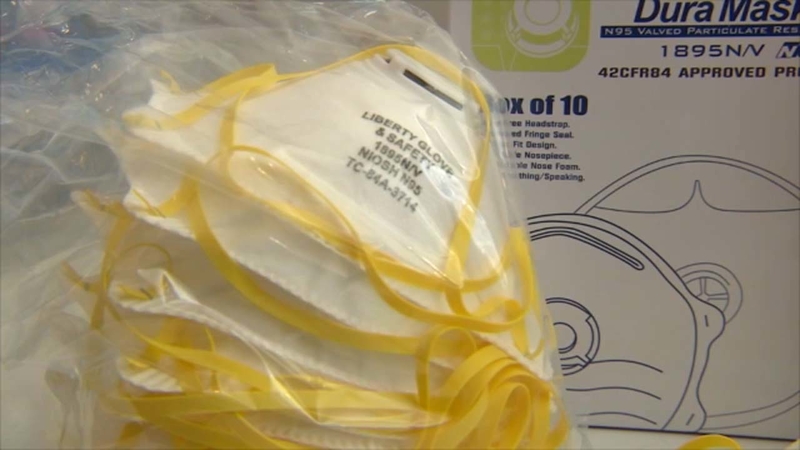 CHICAGO (WLS) -- The nationwide competition for Personal Protective Equipment (PPE) that Illinois Governor JB Pritzker calls the "wild West" has forced state leaders and even FEMA into an ongoing competition to find and purchase safety equipment needed to fight the global COVID-19 pandemic.

"The left hand doesn't seem to know what the right hand is doing. No one seems to be in charge," Rep. Schneider told the I-Team.

"We need someone who says, I'm in charge, I am, the buck stops here. But I'm going to work with everybody across the country -- public and private sector -- this is not just all of government, but all of nation mobilization," he continued.

Congressman Schneider said during a Thursday conference call he pressed FEMA leaders for federal coordination of the acquisition of PPE such as masks and ventilators instead of leaving it to individual states to figure out.

"If we had a national effort, we could identify who has the capacity, let's use the example the N95 mask, who has a capacity to make these masks. This is the price we're paying. We can give out those orders and make sure that the inventory is getting to the states that need it most just in time," he told the I-Team.

The I-Team collaborated with investigative reporters from ABC Owned Stations across the country to investigate the PPE supply chain.

The nationwide competition for Personal Protective Equipment (PPE) has forced state leaders and even FEMA into an ongoing competition to find and purchase safety equipment.

As coronavirus testing expands and more positive cases are being identified every day, doctors, nurses and other healthcare workers are scrambling to find enough personal protective equipment (PPE) to replenish their dwindling supply.

Now, cities across the U.S. are left vying for the same equipment, creating competition for those materials and driving up prices through bidding wars.

In Texas, a large purchase order for PPEs wasn't honored after someone else offered to pay more and created a "bidding war," Houston Mayor Sylvester Turner said.

Houston Fire Department Chief Samuel Peña said he received a shipment of supplies from Mexico and has looked as far as the Middle East to secure more equipment for first responders.

"We ought to be doing is doing these kinds of purchases en masse through the federal government, they should have led this to begin with," Pritzker told reporters Saturday.

Monday, Pritzker said the federal government sent the wrong type of mask - they received surgical masks instead of the requested N95s.

In Philadelphia, the Federal Emergency Management Agency only fulfilled 44 percent of the state's requested PPE, leaving them short more than 382,000 N95 respirators and still in need of more than half a million face and surgical masks, according to a report Thursday from the U.S. House Committee on Oversight and Reform.

North Carolina has received only a portion of the masks, gowns, gloves and face shields it requested from the federal government. Officials there are fighting back against scammers who are trying to take advantage of the need for PPE by "making offers and demanding up-front payment for something that looks sketchy and is probably not a real thing," said Wake County EMS Assistant Chief Jeff Hammerstein.

New York Governor Andrew Cuomo, whose state has more than 92,000 confirmed cases, said states are willing to pay whatever it takes to get their hands on supplies and even though that continues to increase costs, it is not even considered price gouging since it is private market competition among bidders.

The gear includes everything from gloves, face shields, gowns, sanitizers and N95 masks, a respiratory protective device that is the best way to prevent a COVID-19 positive patient from transmitting the virus to the workers treating them.

"Not only is it a lack of supplies would harm us or hurt us in the ability to take care of patients, but it would endanger the staff as well and if staff gets sick and they can't come in to take care of patients that makes it even doubly challenging," said Cliff Daniels, chief strategy officer for Methodist Hospital of Southern California.

California Gov. Gavin Newsom said the state needs more than 100 million N95 masks just to meet needs. He said governors across the U.S. are starting to form partnerships and consider connecting procurement teams to work together and ensure "none of us are being greedy at this moment and that we have the capacity to move things around."

"We want to help other states even as large as Illinois and Washington State, some of the largest states in our nation, to see if we can help procure not only a reduction in costs per unit, but also procure a mindset where we're not playing in the margins of a zero sum where it's us versus them," Newsom said.

There were nearly 240,000 confirmed COVID-19 cases in the U.S. as of Thursday afternoon, according to the John Hopkins University's Coronavirus Resource Center. In addition to protection for frontline workers, the equipment to keep critically ill patients alive is also at the center of the bidding war.

Cuomo called on the federal government - or even states themselves - to get organized and eliminate private market competition.

The federal government says it is providing some relief. The U.S. Department of Health & Human Services announced last month that it would purchase 500 million N95 respirators over the next 18 months for the Strategic National Stockpile.

Now, the government is relying on additional funding to "exhaust all means to identify and [obtain] medical and other supplies needed to combat the virus."

The Coronavirus Aid, Relief, and Economic Security Act, which was signed by President Trump last week, allocates $27 billion "for the development of vaccines and other response efforts, including $16 billion to build up the SNS with critical supplies, including masks, respirators, and pharmaceutics," according to FEMA.

U.S. governors join President Donald Trump at least once a week for a conference call about the latest on the coronavirus pandemic and where current supply of personal protective equipment stands.

"Some have insatiable appetites and are never satisfied (politics?). Remember, we are a backup for them. The complainers should have been stocked up and ready long before this crisis hit. Other states are thrilled with the job we have done," he tweeted. "Sending many Ventilators today, with thousands being built. 51 large cargo planes coming in with medical supplies. Prefer sending directly to hospitals."

Even when FEMA shares materials from its stockpile, it is sometimes only enough to get cities through a few more days and at times has left cities discussing the possibility of shutting down testing sites due to lack of supplies.

Amid the shortage, the federal government is encouraging the reuse of PPE and creating guidelines for how to adequately clean and recycle the equipment, including some items that healthcare professionals have said are typically intended for one-time use.

Earlier this week, FEMA said 80 tons of PPE supplies were delivered to New York, New Jersey and Connecticut, which have become one of the U.S.' hotspots for cases. Supplies were also delivered this week to Chicago and FEMA says items will be distributed across the U.S. based on the greatest need, such as "areas experiencing the greatest increase in COVID-19 cases with the largest forecast capacity shortfalls."

But, cities say the materials aren't getting in the hands of healthcare workers quick enough.

Cohen said the pandemic is unlike any other natural disaster. It is taking over the entire U.S.; not just one localized region.

It's something FEMA is tasked and prepared to handle, he said, but the government was too slow to act, leaving critical need areas struggling to acquire equipment and establish hospital overflow areas.

"They were created to deal with situations like this and they're beginning to manage this disaster in the way that they prepared to do so. The only question I have is why did it take so long for the administration to activate FEMA at this level? This should've been done months ago," Cohen said. "We've lost time and when you lose time in a natural disaster or any type of public health crisis, people die."
Report a correction or typo
Related topics:
health & fitnessillinoiscoronaviruscoronavirus illinoishospitalsi teamu.s. & worldpoliticscovid 19
Copyright © 2021 WLS-TV. All Rights Reserved.
CORONAVIRUS
Sunday Mass at Holy Name Cathedral
Parents knowingly sent child with COVID to class, prompting quarantine
COVID outbreak on cruise ship approaching New Orleans
Families protest as school cancels all activities amid COVID outbreak
TOP STORIES
22 shot, 6 fatally, in Chicago weekend violence: CPD
Families protest as school cancels all activities amid COVID outbreak
CTA bus driver beaten in Loop: CPD
Easy holiday party appetizers from Chicago chef
Former US senator Bob Dole dies at age 98
Teen shot in Chicago's Loop: CPD
Our Chicago: Type 1 diabetes
Show More
Toys for Tots parade Chicago: Motorcycle event returns after year off
Passenger jumps out of plane taxiing at Phoenix airport
Women robbed while volunteering for My Block, My Hood, My City
New details on violent drawings reported before MI school shooting
$1M in stolen retail items recovered from storage units: AG
More TOP STORIES News