Expect rise in US COVID deaths, hospital admissions over next 4 weeks: CDC forecast

The CDC forecast now predicts that approximately 5,000 deaths will occur over the next two weeks.
By Arielle Mitropoulos 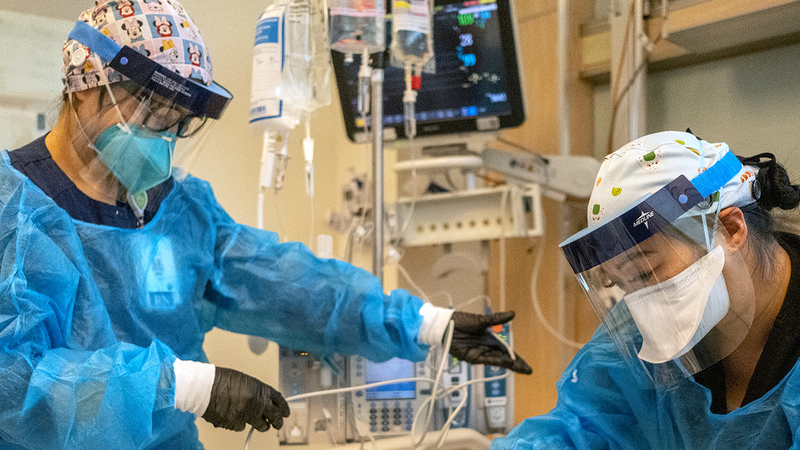 COVID-related deaths, hospital admissions projected to rise in US

For the first time in months, daily hospital admission levels and new COVID-19-related deaths in the United States are both projected to increase over the next four weeks, according to updated forecast models used by the Centers for Disease Control and Prevention.

The projected increases come after weeks of steady upticks in infections across the country, subsequent to the removal of masking requirements and mitigation measures in many states and cities.

The forecast now predicts that approximately 5,000 deaths will occur over the next two weeks, with Ohio, New York and New Jersey projected to see the largest totals of daily deaths in the weeks to come.

"We are still in the middle of a pandemic, to be sure -- there's no confusion about that," Dr. Anthony Fauci, the nation's top infectious disease expert, told Foreign Policy last week.

MORE: US in 'a different moment' but COVID-19 pandemic not over, Dr. Fauci says
EMBED More News Videos

Dr. Anthony Fauci says the coronavirus is under better control in the United States, but the COVID-19 pandemic isn't over.

The forecast models show that 42 states and territories in hospital admissions across the country, including New York, Minnesota, Wisconsin and Florida, are projected to see increases in the next two weeks.
Nationally, a growing number of COVID-19 positive patients have already been admitted to hospitals, requiring care, federal data shows.

Since late last month, daily hospital admission totals have been slowly increasing, particularly in the Northeast, according to CDC data. And in the last week, admissions have jumped by 20%, with emergency department visits also up by 18%.

On average, more than 2,200 virus-positive Americans are entering the hospital each day -- a total that has increased by 20% in the last week, the CDC reports. This also marks the highest number of patients requiring care since mid-March.

Overall, there are about 18,300 patients with confirmed cases of COVID-19 in hospitals across the country, up by 18% in the last two weeks, the Department of Health and Human Services reports.

Although totals remain significantly lower than during other parts of the pandemic, admission levels are now on the rise in every region of the country.

Nationally, new infection rates have reached their highest point in nearly two months. More than 60,000 new cases are being officially reported each day, up by 27% in the last week, according to the CDC.

In the Northeast and New York-New Jersey region, infection rates have risen by 64.8% and 54.8% respectively, over the last two weeks.

MORE: Doctors investigate why some report rebound in COVID symptoms after Paxlovid

Since last summer, dozens of states have moved to shutter public testing sites, with more at-home COVID-19 tests now available. Most Americans are not reporting their results to officials, and thus, experts say infection totals are likely significantly undercounted.

Health experts say a confluence of factors is likely driving the nation's latest viral resurgence, including the easing of masking requirements and other COVID-19 restrictions as well as highly contagious omicron subvariants, which have been estimated to be between 30% and 80% more transmissible than the original omicron strain.

With vaccine immunity waning and the presence of variants of concern growing, health officials continue to urge the public to get vaccinated and boosted to prevent the risk of severe disease and hospitalization.