COVID vaccine hesitancy puts Illinois, US behind on race to herd immunity 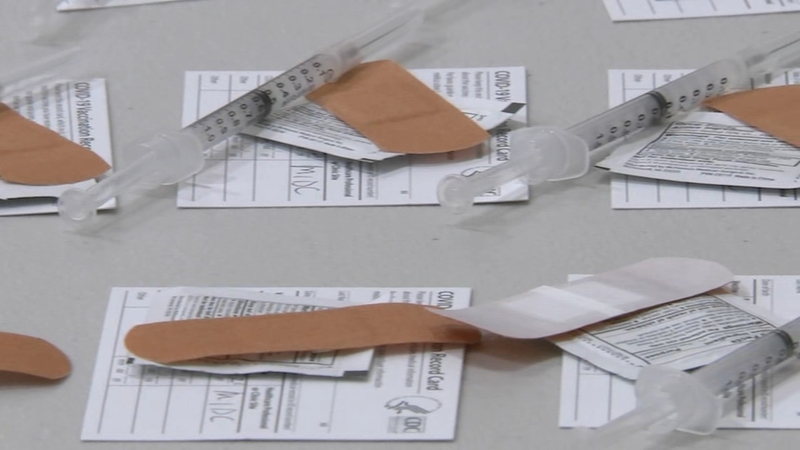 CHICAGO (WLS) -- There are huge challenges in the quest for herd immunity with millions of adults in Illinois remaining unvaccinated.

The I-Team examined why demand for the vaccines is dropping and what it might take to reach vaccine holdouts who are making herd immunity so difficult to reach.

Both Illinois and the United States as a whole is far short of its COVID vaccine herd immunity goal, which would see eight out of 10 people vaccinated against the coronavirus.

In order to achieve herd immunity, 75 to 80% of the population has to be protected by vaccination or having had the illness, and the pandemic will end. But there appears to be a real possibility that threshold may never be reached.

Both Illinois and the United States as a whole is far short of its COVID vaccine herd immunity goal, which would see eight out of 10 people vaccinated against the coronavirus.

In order to jump the herd immunity hurdle, many people, from grassroots outreach organizations to your own doctor, are working together to assuage the fears of the vaccine hesitant and help them get the shot. With enough immunity, the population will be able to get back to life as they remember it, and achieve some sense of normalcy.

Diane Latiker is the founder of Kids Off the Block, an outreach program that pivoted to street-level canvassing to encourage residents in Chicago's Roseland and Chicago Heights communities to get vaccinated.

She said she is having the vaccine debate more often than she'd like, impinging on President Biden's new vaccination goal of at least one shot into 70% of adult Americans by the Fourth of July.

"I want my community to count in health, don't bypass them because of their economic status or where they live, the color of their skin. They got to be just as important," Latiker said.

She worries about the growing trend of vaccine avoidance among younger adults.

"The millennials, the Gen Z, they didn't want anything to do with the vaccine because of all the misinformation online," Latiker said. "It's so in-your-face every day on social media."

COVID-19 vaccines administered in the U.S. has dipped below 2 million per day for the first time since early March. Gov. JB Pritzker said Illinois is now cutting back its vaccine orders, not because they aren't needed, but because there is not as much demand.

"We've got quite a number of vaccinations that are available in the in the state that are still unused, and so we want to make sure that we're working through the inventor that we got," Pritzker explained. "We're going to ramp down the number of vaccination-vaccines, rather,--than we're getting for the state. And we, obviously, the federal government has made all of that still available of that, even if we were to say we want 10% or 20% less, those doses are still available to use in the following week."

Incentives from free museum passes and free targets at a gun range are offered by Illinois officials. Federal government agencies are trying to sweeten the deal with everything from donuts to drinks, hot dogs at Coney Island, and even a chance at free Super Bowl tickets.

"I've seen different clips on, people talking about how it's dangerous and I kinda believe it," Person said.

His brother who works in health care did get the vaccine.

"We got two different opinions so - he chooses not to take it, so that's on him," Leroy Person said.

Whether on the fence or dead set against it, millions of holdouts could upend progress against COVID-19. State and federal health experts and scientists are taking the recent widespread downturn in vaccine demand seriously. If the virus undergoes significant mutation, it will be difficult keeping the spread manageable.

"If we have more people that decide not to get vaccinated then there's gonna be more opportunities for the virus to mutate and evolve and come up with different variants," said Pablo Penaloza-MacMaster, a vaccine researcher at Northwestern Medicine.

In his lab, scientists are working to create future vaccines that will increase the immune response to the virus. He said current vaccines are safe and effective.

"Thinking that vaccines don't work is kinda like ignoring history," he said. "The only way to get rid of this pandemic completely is by everyone getting vaccinated."

Ilinois is on par with the rest of the country, with about one-third of the state now fully vaccinated. Although a slowdown was always predicted, in some parts of the state, the decrease is more prominent.

An I-Team analysis of IDPH data since vaccine demand peaked statewide in mid- April reveals in the southern region of Illinois, the seven-day average of vaccines administered is down 60%. For the Northwest regions, demand has dipped 54%. In the suburban regions, including Cook County, there's a decrease of 46%. Chicago has seen a 48% drop over the same period.

"We have a long way to go still in terms of working on access, working on convenience, working on that confidence building," said Dr. Allison Arwady, Commissioner, Chicago Dept. of Public Health.

Chicago's top public health doctor said the city is rolling out new strategies, including "gentle incentives" to reach the unvaccinated.

"We want to get past COVID as a city," Arwady said. "It doesn't do us any good to have one part of the city 90% vaccinated and one part 30% vaccinated, you'll just see COVID keep showing up in those parts of the city less vaccinated."

"It's not a question of being, you know, finger wagging and saying, 'You have to do this because I'm your doctor and I'm the authority here,'" said Dr. Doriane Miller, Associate Professor and Director of the Center for Community Health and Vitality, University of Chicago Medicine. "It's a question of being hopefully a trusted source of information around this."

Across the state, health officials are also adjusting their sales pitch and planning to bring the vaccine to smaller clinics and doctor's offices in hopes of reigniting demand.

"Going to have to really get into more of a ground game if you will to really deal with the uncertainty and the concerns our residents have," said Karen Ayala, Executive Director, DuPage County Health Department.

"We have to let people know that there are people who care enough to get out here and walk these streets and try to get you vaccinated so we can all be protected," Latiker added.

White House advisers are acknowledging vaccine rates have plateaued in some parts of the country, which could create pockets at risk for future outbreaks.