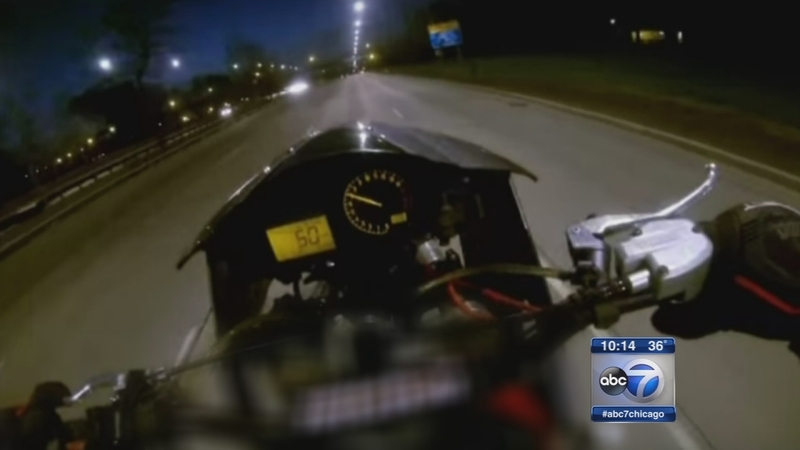 CHICAGO (WLS) -- The ABC7 I-Team investigates the new rough riders: biker gangs that come from nowhere as you're driving down the highway, and in some cases, cause high-speed accidents and deaths.

They are fast and loud - sometimes alone, sometimes in packs - high-performance sport bike riders that some people call "crotch rockets". Converging on highways typically after dark, performing risky stunts, buzzing motorists and taunting police. Videotaping their hobby all for fun and fame while risking their lives and others.

One metro Chicago biker and fellow riders pop wheelies while racing Lake Shore Drive. The ABC7 I-Team is using his video, but he wouldn't let us use his name or be interviewed. Recording and posting these exploits on the Internet are part of the rush for stunters, or stunnas.

Tony Recchia was a Chicago stunter for years. He says stunting is not a crime, but an extreme sport.

"Most of us who are doing stunts practice before we take to a street like Lake Shore Drive. We're going maybe 50 mph or maybe 60 tops. To call us criminals and label us as felons, the punishment really doesn't fit the crime," Recchia said.

Some sites compile videos of police chasing motorcycles at very high speeds, with one bike speedometer clicking more than 100 mph and demonstrating how easy it is for bikers to get away. In another video, the mobility of a two wheeler allows it to cut across an expressway median and escape at high speeds.

In Chicago and the suburbs, it's an ongoing problem.

"We consistently hear about it since I have been in office. We continually get emails continue to get phone calls. There is a difficulty in catching these individuals," said Ald. James Cappleman, 46th Ward.

Spanning months, a Lake Shore Drive condo owner captured video after video for the I-Team of bikers racing and doing tricks. For those living along the outer drive, the late night antics are deafening and disturbing.

"They are endangering everyone when they are going by in these packs at this speed," said Julie Brudlos-Nussbaum, a Lake Shore Drive condo owner.

Just last month during a horrific accident, 20-year-old Charles Lyons was charged with reckless homicide after police say he hit two pedestrians with his sport motorcycle in a Lake Shore Drive crosswalk. Lyons was accused of weaving through traffic, killing a 25-year-old German tourist and seriously injuring a 40-year-old man.

"We realize it's a problem and we unfortunately think that's the realm of law enforcement," said Jim Viverito, Board of Directors, American Motorcyclist Association.

Despite the seriousness of this public safety issue, Chicago Police refused to discuss with the I-Team how biker brigades manage to get away with this kind of conduct on the city's most famous roadway.

A written statement claims officers do uphold traffic laws, stating "Officers assigned to Lake Shore Drive are trained to use radar," and "take enforcement action as appropriate." But residents point out that the activity continues.

"It sounds crazy because you hear them running all over the city up and down LSD," said Peter Brown, a Chicago resident.

Catching them on video and tracking them down later is not much of an option. Laws prohibit speed cameras on many Illinois highways, including Lake Shore Drive.

The Chicago Ducati Riders are headed out for one last ride this season. One member told the I-Team that they share the road responsibly are law-abiding, representing the majority of bike enthusiasts.

"The sport bike community is now viewed as the 'outlaws' of the road - which is unfortunate because the real outlaws are, in my estimation, a small group of young people who are just behaving badly," said Todd Pugh, a member of the Chicago Ducati Riders.

Here in Illinois, deadly motorcycle accidents have doubled over the past 20 years.

The American Motorcyclist Association stresses that it encourages members to always ride responsibly.