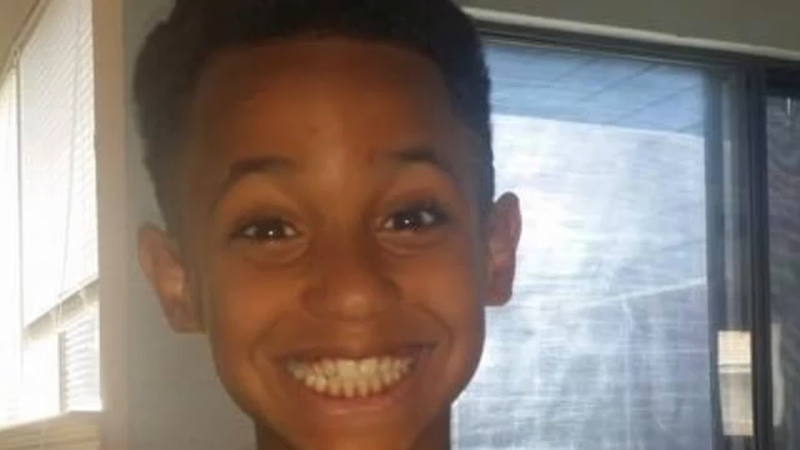 The father of 11 year old Kamren Jones, who was shot while he sat on a sofa, talks about that tragic night

CHANNELVIEW, TX -- The father of 11-year-old Kamren Jones, who was killed by gunfire while he slept over the weekend, said his son was his MVP.

Kenyatta Jones is a single father of seven and worked hard to provide for and protect his children. Sunday night his son was shot in what the Harris County Sheriffs Office believes was a case of mistaken identity.

Sheriff Ed Gonzalez said an unknown person shot at the home, ultimately striking and killing the boy while he was sleeping.

Two months ago Jones decided his family would upgrade and move into a bigger home.

They moved to the quiet side of Channelview on North Brentwood. The little tan house he picked is surrounded by families who were long-time residents.

"The house, it was on three acres. It was plenty of room to play. These kids are active. They needed that room. It's the only reason I picked It,"Jone said.

But what Jones didn't know was that the house was notoriously known for on-going criminal activity. The Harris County Sheriff's department confirmed to ABC13 that last year there were six service calls to the home. One of those was a shooting where one of the tenants was targeted. No arrest was made.

"A lot of activity and possible criminal activity a part of that," investigators said when talking about the previous renters.

Investigators said they they don't believe the Jones family was the intended target of this shooting on Sunday.

Neighbors told ABC13 there was a big relief when the Jones family moved in. They thought the terror was over, but Sunday night they woke up to what sounded like a war zone.

Sheriff Ed Gonzalez said an unknown person shot into the home using an assault rifle, ultimately striking and killing Kamren Cassius Jones while he was sleeping. He was pronounced dead at the scene.

Gonzalez said a number of casings were found in the driveway.

"They're cowards to shoot into a home not knowing who was in there," said Gonzalez. "They shot an innocent child that's there and this is uncalled for. This is sad, tragic, senseless and we're going to go after you."

Jones said his son was a leader, an over-achiever, and had so much in store.

"As a parent, when we put in our hard work, providing for them, waking up, going to work every day, going to school... you want to be rewarded and the best reward is watching your kids grow," Jones said.

Gonzalez said several other children were in the room at the time of the shooting but were not injured.

Kamren was a student at Schochler Elementary School and was currently in summer school.

A GoFundMe account has been set up to help the family of Kamren.

Anyone with information is asked to call the Harris County Sheriff's Department at 713-222-6000 or Crime Stoppers.
Report a correction or typo
Related topics:
channelviewcrimechild deathshootingdrive by shootingchild shot
Copyright © 2021 KTRK-TV. All Rights Reserved.
CRIME