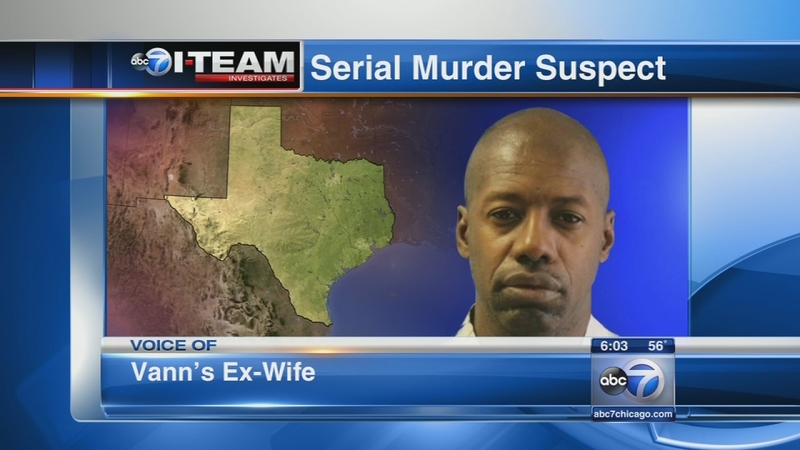 Vann, 43, was arrested in his Gary, Ind., home after the body of Afrikka Hardy was discovered in a motel. He had arranged a meeting with the 19-year-old through Backpage.com, a website that is popular with prostitutes and their clients.

According to the police affidavit, Hardy and her friend, Shameeka Cunningham, ran an escort service. Cunningham became suspicious when Hardy's planned encounter with Vann, who called himself "Big Boy Appetite," went long. When Hardy did not answer her cell phone and Cunningham received "unusual" text messages that seemed to be from the male client, she and a male friend went to the Motel 6 where they discovered Hardy's body.

Vann told police he wore white gloves as he strangled Hardy with his hands and an extension cord, officials said. He then put her body in the bathtub of the motel room, turned on the shower, and left.

The discovery of Hardy's body led police in northwest Indiana on a fast track to numerous other corpses. Hours before his name was officially released, the ABC7 I-Team identified Vann through various law enforcement officials, police records and court files in Indiana and Texas.

As of Monday, the bodies of seven women, including Hardy, had been discovered at locations in Hammond and Gary, according to Lake County officials.

In Texas, Vann's ex-wife, who asked not to be named, said she last spoke with him just before he went to prison for a sexual assault that occurred in an Austin, Texas, apartment complex.

"This is all unbelievable to me," she said. "A total shocker. I never knew him to be violent, never."

According to a court file from his Texas sex conviction, Vann arranged to meet a 25-year-old woman and attacked her in December of 2007. Police say he tripped her and then began to strangle her. When he felt her body go limp, he raped her, according to the report.

Vann was convicted of the sexual assault in September of 2009 and sent to prison for five years.

His ex-wife says she knew a different kind of man, one who was friendly, protective and not abusive. According to her, they grew apart and divorced in 2011.

"He was so protective of those around him," she said. "He was a real friendly person, that's why all this is a shock to me. He had a job all the time; if he lost one, he would quickly get another one.

"He didn't drink," she added. "He was a loner more than anything."

After release, Vann moved back to his home state of Indiana in July of 2013, according to Lake County, Indiana, Sheriff John Buncich. Since then, Vann has complied with sex offender registration requirements, Sheriff Buncich told the I-Team.

"He last registered on September 11 - just last month," Buncich said. "We had detectives sent out to his address to make sure he lived there. He did."

Vann was found to be living in a home on 50th Court in Gary. He was on the neighborhood watch, according to his neighbor.

"He was quiet," the neighbor said. "He was a pretty good neighbor."

The last entry for Vann on the Texas sex offender registry lists his risk level as "low." But what police say has transpired the past 72 hours is anything but minimal.

The I-Team asked Buncich whether there could me more than seven victims.

"Who knows?" was his reply. "Our CSI forensic investigators are on the case right now."