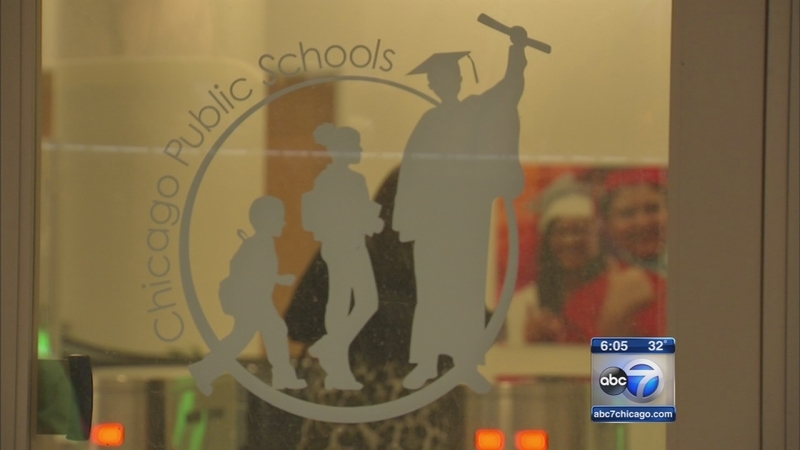 CHICAGO (WLS) -- Chicago Public Schools has made a $725 million tax-exempt bond sale that it says, combined with the $100 million in cuts announced Tuesday, will get the district through the school year by offsetting debt.

Credit-challenged CPS agreed to pay a whopping 8.5 percent interest rate on most of the bonds it sold Wednesday. Some of the money will be used to make interest payments on old debts. The district said it had hoped to secure $875 million from bond sales.

TAKING IT TO THE BANK

On Wednesday morning, the CTU took its frustration to the bank. Union members rallied at the Bank of America in Chicago's financial district to withdraw hundreds of thousands of dollars and closed their account in an effort to protest investments CPS made with Bank of America. They took $726,000 from the LaSalle Street BofA location to transfer it to Amalgamated Bank.

Even as the teachers union closed one bank account, the I-Team has learned that teachers' pension funds were being invested in financial institutions long-condemned by the union.

Is it hypocritical for Chicago teachers' pension money to be invested in banks that the teachers union claims are toxic and predatory? For years, the union has targeted a dozen banks that it claims the city and school system should stop doing business with.

"We are here today to take a needful and necessary action," said Michael Brunson, recording secretary of the Chicago Teachers Union, the third-highest-ranking member of the union.

The CTU has condemned Emanuel, the city of Chicago and CPS for "risky deals" with so-called predatory lenders, among them the world's largest financial institutions.

An I-Team examination of the most recent teachers' pension fund financials show that more than $505 million is invested in at least six of the very same financial institutions.

Among the firms where teachers' money is currently invested, according to the most recent filing: JP Morgan, UBS, Citigroup, Deutsche Bank and Wells Fargo.

Those financial institutions are on a teachers union hit list. Last month, the union "called on Chicago City Council to take legal action against predatory bank deals" at those institutions and several others.

While the pension board is a state-chartered entity independent from the union, its 12 members are composed of six current public school teachers and three retired teachers. One board member is a CPS principal or administrator and two are appointed by cps. The pension board members have not replied to our questions.

In a statement, a CTU spokesman said while CTU "does not control CTPF investments, we are proud that the CTU members that serve as trustees have helped move the fund toward responsible and progressive investment strategies."

The Chicago Teachers' Pension Fund currently invests more than $10-billion dollars on behalf of 58,000 members. The fund's executive director said that some of their investments in question are long-term that they buy and hold. Late last year, the pension fund filed a federal anti-trust lawsuit against some of its biggest investment banks, claiming a stranglehold on the market by so-called interest rate swaps.

Chicago Public Schools has made a $725 million bond sale that it says, combined with the $100 million in cuts announced Tuesday, will get the district through the school year.

RAUNER: CPS, MAYOR 'KICKING THE CAN'

Now, Governor Bruce Rauner said he is ready to jump in - angling for a state takeover of the district.

"The numbers don't lie. CPS has been a financial disaster for years... and now they want to borrow money to cover operations... that's basically tax and delay," Rauner said. "This does not solve the problem."

"Borrowing money was never a decision that we took lightly and though some wanted our efforts to fail, CPS needed to move forward in order to keep our doors open so we could educate our children," said Ron DeNard, CPS VP for finance. "CPS faces many financial difficulties ahead, but we are committed to working with CTU on a long-term contract and the State to finally address the inequitable state funding for CPS that is driving the District's budget imbalance."

Rauner says CPS and the mayor have once again "kicked the can" down the road.

At an event to announce a new economic development agency for Illinois, the Republican governor dismissed charges that his talk of a possible CPS state takeover and bankruptcy has damaged the district's effort to borrow enough money to survive the current school year.

"That's ridiculous. I believe that's City Hall flailing, floundering and failing and looking to blame others for it," Rauner said.

Mayor Rahm Emanuel made a personal appeal to potential high-interest lenders on Monday. Rauner says CPS told potential bond buyers the debt would be secured by yet another property tax increase.

The governor insisted he had not given up on getting bills passed in the General Assembly to allow the takeover and allow CPS to file bankruptcy.

Senate President John Cullerton has called Rauner's effort "a non-starter" in his chamber as well as the Democratic-controlled House. But the governor counts lawmaker heads differently.

"You watch what Democratic legislators around the state who are not from Chicago like the speaker and the president are, you will see that that bill, that bill is not dead on arrival as some are trying to claim," Rauner said.

On Monday, the Chicago Teachers Union's bargaining team decided to reject CPS' latest contract offer. At a regular meeting of the CTU's House of Delegates Wednesday, nearly 800 union members could have voted to override the bargaining team's decision if they saw fit, but didn't.