Negotiations started at 6 p.m. Monday and continued until 1:30 a.m. Ultimately the teacher's union that represents nearly 450 teachers in Geneva walked out and called for a strike.

Teachers in Geneva said this was a very tough decision to make and called the strike "a last resort." Teachers hit the picket lines outside Geneva Community High School on a frigid morning, chanting and marching and fighting for fair pay and just weeks away from winter break.

The Geneva Education Association has been without a contract since August. Negotiations have been going on since February.

"This is a short-term sacrifice that we have to look at for a long-term benefit," said Kevin Gannon, Geneva Teacher's Association president.

The teacher's union said it's stuck on the board's proposal on how to determine salaries. Teachers are demanding a traditional model based on experience and education. They say the board is trying to attract new teachers but not trying to retain veteran educators.

"We've had people tell us, 'I teach in Glenbard and if I came to Geneva right now, I would take a $25,000 pay cut,'" said Sue Nagle, a Geneva teacher. "We've lost a few teachers and we anticipate losing more."

The Geneva School District says it hopes to reach a fiscally-responsible agreement that compensates teachers fairly and attracts new teachers.

"Our main goal is to bring some of the starting pay of beginning teachers up, yet maintaining the salary for the teachers that are on the top end of our salary," said Mark Grosso, president of the Geneva School Board.

The district says it will update families during what they're calling an "unfortunate disruption" to education.

Grosso said that since the teachers walked out on their proposal, it will be up to them to come back to the bargaining table. Teachers said they'd prefer to be in the classroom with their students rather than walking the picket line. Susie Browning hit the picket line fresh off maternity leave.

"I love my job and it's just heartbreaking," she said.

Meanwhile, students had an unexpected day off. Some set up study hall at a local coffee shop.

"I think I understand where teachers are coming from, why they're striking, but I also think that it's gonna set a lot of us behind because we're missing so many days," said Ava Pignataro, a senior at Geneva Community High School.

After school activities, including sports, have also been canceled due to the strike. Wrestling coach Tom Chernich is hoping his athletes won't have to miss much practice.

"Hopefully I can get back in the room and get our kids working out again," he said.

Some students showed up to support their teachers with hot chocolate and other treats.

"Maybe it's not the most common thing for kids to say right now, but I love school," said Mary Kassel, also a senior. "Like, I love going, I love learning, I love getting to see my friends and I know, like, how much these teachers care about me."

There is no indication as to how long the strike will last and there are no bargaining sessions scheduled.

After the end of negotiations, Gannon said in a statement, "The board's salary model continues to be an untested model that no other school district in Kane County uses to compensate its educators. Our members and the community have been very clear that a traditional step and lane salary schedule that determines salary based on experience and education is important to them. The board's latest offer does not meet that expectation."

The school district released a statement saying, "The Board of Education is grateful for the many calls and emails urging both parties to resolve their differences and to put the needs of our students first by reaching agreement on a fair and fiscally responsible multi-year contract that compensates our teachers fairly and competitively for their work, while operating within the financial means of the District and advancing the best interests of all District 304."
Report a correction or typo
Related topics:
educationgenevastriketeachers
Copyright © 2020 WLS-TV. All Rights Reserved.
RELATED 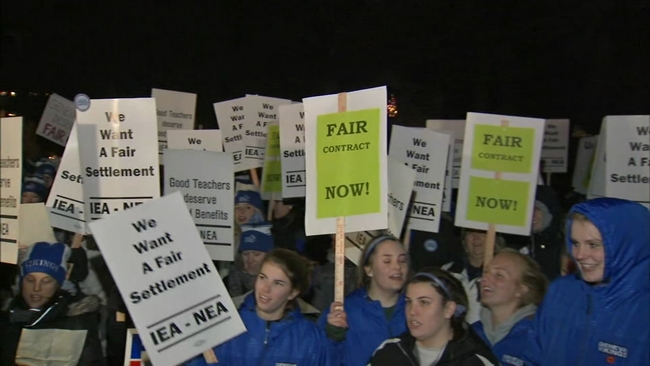